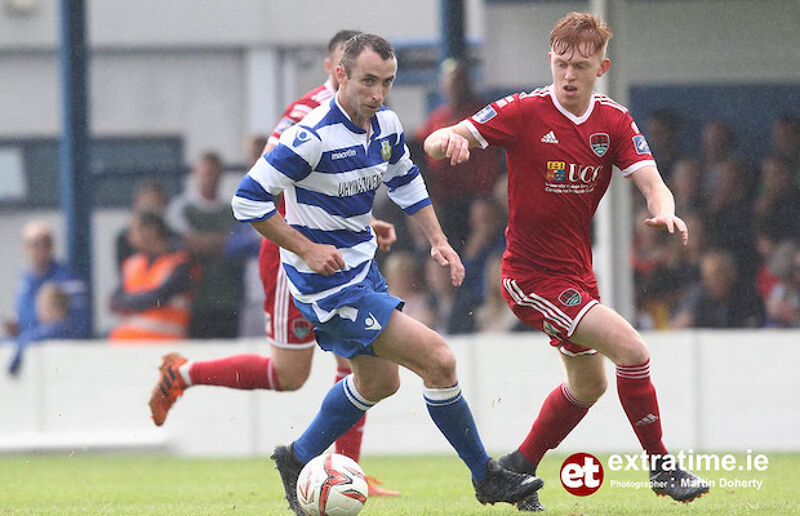 A League of Ireland career liberally sprinkled with silverware, but one interspersed by the seemingly inevitable cases of clubs' financial struggles is a telling factor why Ollie Cahill first became an active PFAI member in 2009 and today presides as the association's Player Executive.

Prior to emerging at the top level of domestic football, a teenage Cahill tasted FAI Junior Cup success in 1994 with local outfit Clonmel Celtic.

“To win the FAI Junior Cup with my hometown club is something that still ranks up there as one of the highlights of my career. It was a stepping stone too for what happened next, as it was during that run to the final that I was spotted by a Northampton Town scout. To win a trophy like that, which has huge participation and hundreds of clubs entering was an incredible achievement.

"Clonmel is a hotbed of soccer and we had a really good side, which just clicked that year and we only lost one game that whole season, which happened to be the Munster Junior Cup final. We had a 25th-year reunion of that team last year. It was great to see everyone again and go over all the memories from a year which will live long in my thoughts and taught me so much about football.”

Returning home from England in 1996, the Munster man linked up with Cork City. Despite landing the FAI and League of Ireland Cups while on Leeside, the more realistic chance of capturing a Premier Division title lay in joining Shelbourne in 2002.

“It was tough to leave City, but I felt it was a decision I had to make for my career. I was 26 and wanted to win the league, which at the time I felt Cork just didn't have the ambition to do that.

"Shelbourne were a top club and always challenging to win things during that era and it was a move that really appealed to me. It was a case of going to try to win things and see where it took me.

"My first competitive game for Shels happened to be in Turner's Cross against City, a game which we lost 3-0 and I did wonder after that game if I had made the right decision. City had just signed the likes of John O'Flynn and George O'Callaghan, who turned out to be top players.

"I think looking back though, after winning three titles in five seasons and some incredible European nights (with Shels) that I made the right choice.”

Were it not for the Tolka Park side's well-documented monetary issues in 2006, the left-winger would have remained there in order to add to the on-field success.

"I definitely would have stayed longer, as I loved playing for the club. I had, in principle, agreed a new deal before the troubles hit and it was unfortunate the way it ended. We had a very talented team, which was full of top-quality players and winners. I've no doubt that we would have gone on to achieve even more if things had continued on.”

Subsequent to leaving Shelbourne, Ollie had spells at Drogheda United (2007 Premier Division and Setanta Cup triumphs preceding financial difficulties), Shamrock Rovers (a fifth league title for Cahill in 2010), Sporting Fingal (who went out of business while he was there) and Bohemians.

“It takes a huge effort to win any title. I suppose the first one you win always ranks up there as possibly the best. The sense of achievement you get from going through a season and coming out on top was something I hadn't felt before in senior football ... It drove me on again to want more.

"Also, the last one with Shels, when we were going through so much turmoil at the time shows what kind of mentality that squad had and how good we were. Pat Fenlon and the coaches deserve great credit for keeping us going, and ultimately finishing out the season as champions.

"To win the title with Drogheda for their first time was extraordinary. I had a tough time at the start of my stay, but gradually got my head around things there and finished out the season strongly.”

It was while on the books of Shamrock Rovers that Cahill took on the role of PFAI Delegate Liaison Officer and continues at present to look after footballers' interests.

“I saw the value first hand of what the union did for players through my own experiences at Shelbourne and Drogheda. It was just something that I felt having gone through that I might be able to help others if they were to go through something similar.

"I had experienced quite a bit of the highs and lows of League of Ireland football, saw how players were treated at certain times and wanted to be able to do something about it.

"When the opportunity presented itself, I went for it and thankfully got on board with the union. I would basically be a link to the players, ensuring they are aware of the union's benefits and getting them signed up as members.

"We visit most club's around three times a year and make them aware of things they need to look out for: their contractual rights, the do's and don'ts, as such.

"We keep them up to speed on any changes that might be forthcoming in the league and just ensure their voice is heard, with a platform to improve things.

"We would have a delegate at each club and I'd keep in touch regularly with them, to ensure information is filtering down and vice versa, that they are making us aware of issues happening on the ground.

"It's been tough this year for everyone, but I think great credit is deserved to all for getting the season to a conclusion. It's been a huge effort and here's hoping we can have a full season next year.”

Maradona, the Butcher and the two-year rivalry with Athletic Bilbao https://t.co/9APIjUpgM6 pic.twitter.com/ZTtAraa9Eu