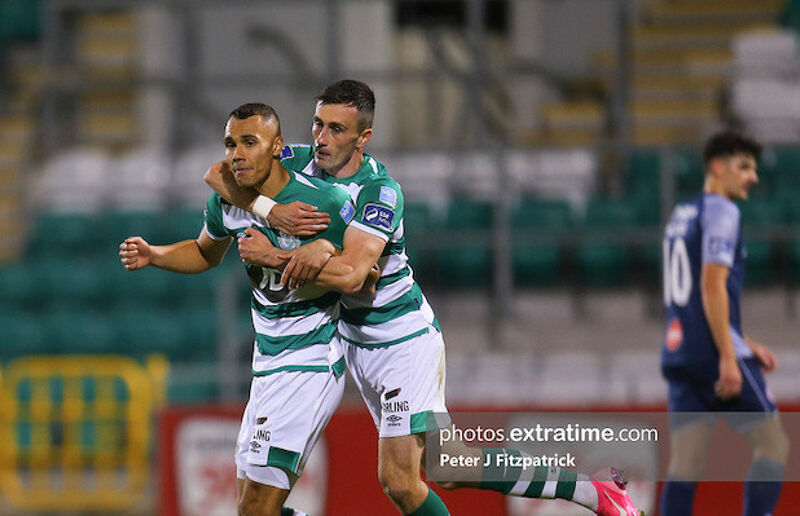 Having gone 850 minutes of domestic football since the end of August only conceding one goal, Shamrock Rovers found themselves two goals down away to Finn Harps last week after only 21 minutes. It seemed unlikely at that stage that the Hoops would be hosting Sligo Rovers in Sunday’s FAI Cup semi-final (kick off 2pm) but they are.

It wasn’t just the drama of the come back from two goals down to win – the first time they have done so since a 4-2 win over Drogheda United in Tolka Park in the 1997 Leinster Senior Cup (chapeau to Karl Reilly for that stat!), but the manner of getting back into the game – being awarded three penalty in five minutes with Aaron McEneff missing the first and scoring the next two before Graham Burke got the winner.

“We obviously started really poorly and we fully deserved to be 2-0 down at half-time,” said Hoops Head Coach Stephen Bradley speaking to his club’s media team. “But I felt second half we showed tremendous character and fight to go and win the game.

“I think the players knew that we weren’t at our level and at half-time they knew themselves they had to get going. This team has been behind before in games, big games in Europe and it never fazes them.

"We knew the second half would be a better showing and thankfully it was. They rolled their sleeves up and showed tremendous character to go and win the game.”

The Hoops are looking to make it back to the Aviva Stadium by beating Sligo Rovers with the primary aim of retaining the FAI Cup they finally won in Lansdowne Road after a 32 year wait last season.

“Chances to get to cup finals don’t come around so often and when you have it you’ve got to try and grab it. Plus the fact that it’s our cup at this moment in time and we’re going to do everything possible to hold onto it.”

Bradley’s side have beaten the Bit O’Red twice this season with a 3-2 win in Sligo and a 4-0 victory in Tallaght – neither score representing how the match went. Sligo Rovers were well beaten 3-2 in the Showgrounds with Niall Morahan scoring a consolation goal in the 90th minute for the home team.

In Tallaght, according to Hoops Head Coach Stephen Bradley “didn’t think the scoreline is a reflection of that game, it wasn’t a 4-0 game. We’ve watched it back enough times to see that and understand that Sligo are a good team and I’m sure that they’ll show that again.”

The Hoops will have to take on Sligo Rovers without Bradley in the dugout as the home side’s coach received an additional two match ban for his red card against Shelbourne after a verbal altercation with referee Rob Harvey (who is fourth official on Sunday) and will miss Rovers next two matches.

While the Bit O’Red’s last win in Dublin 24 was back in 2013 (a 2-1 victory), Liam Buckley’s men come into the game with two wins in their last two league games that saw them secure fourth place - their best league finish since 2013 in the season they won the FAI Cup.

They ended the league campaign strongly with a 2-0 win against Dundalk in Oriel Park. They’ve given themselves a shot of making the FAI Cup final after a penalty shout-out win in the COVID-19 delayed quarter-final at home to Derry City during the week.

“Winning was all that counted on Wednesday,” was Liam Buckley’s assessment of the manner of their route to Sunday’s semi-final. “It wasn’t a performance we were overly happy with and we certainly need to improve on that. But in the FAI Cup, it’s all about the result and winning in whatever way you can. The most important thing was we progressed.”

They reached this stage of the competition last year and at a minimum they want to go a step further. Having finished fourth in the league, it means that unless Athlone Town can win the FAI Cup, the Bit O’Red will be playing in Europe next year but they will want to do so as cup holders.

“The players will one day look back on their career and what they won during it, and that means medals and trophies. It’s why we’re here. There’s a lot at stake so hopefully we can give a performance. I can’t tell you hard how our players have worked. That’s in the gym, at home, at training, being away from their families and all throughout a challenging year. I’m glad they got the reward of finishing fourth and I would love them to have a FAI Cup final as well.

The Hoops have had more rest time having beaten Finn Harps last Sunday whereas Buckley’s men had to play 120 minutes on Wednesday night. “Playing Wednesday to Sunday is not absolutely ideal, we’d like a week of course, but it’s not an issue for us. We know Shamrock Rovers are best team in the league by a stretch.

“We know the run they’ve been on but we don’t think they’re unbeatable. We’ve got a lot of quality players in our group as well. The players have shown that and I feel there is more to come from us. This is a stage to show it.”

There were 17 penalties awarded in the 2020 Premier Division with 14 scored.

In the First Division 25 of the 28 penalties awarded were converted.https://t.co/yn8dya02EC pic.twitter.com/2vVxxJFB3F

On Sunday it will be 520 days since Shamrock Rovers last domestic defeat in Tallaght. They only defeat since then in Tallaght (and there only loss home or away this year) came in the Europa League second qualifying round when current Serie A leaders AC Milan won 2-0 in Dublin.

Ronan Coughlan was top scorer for the Bit O’Red in the league with six goals. He scored eight last season. He scored four penalties in the league – the only player across any team to score more than one this season in the Premier Division. He also netted in their shoutout win over Derry City during the week.

The last time the sides met in an FAI Cup semi-final was in the Showgrounds back in 2013. The home side ran out 3-0 winners as the Trevor Croly Hoops side were well beaten on the night. Danny Ventre, Alan Keane and Anthony Elding scored the goals and the Bit O’Red went on to beat Drogheda United in that year’s FAI Cup final.

An alternative First Division - how would it have panned out if the FDA got their wish to exclude Shamrock Rovers II?https://t.co/BofL6t9Ii4 pic.twitter.com/rEAMMTxh94