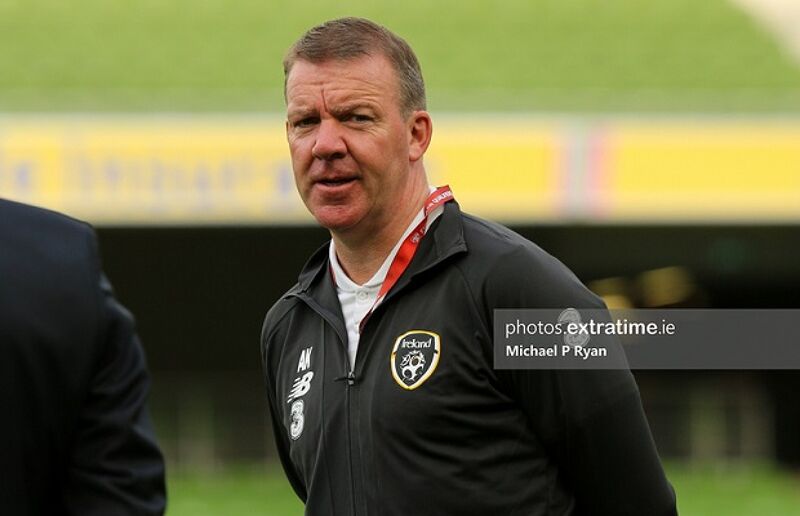 Republic of Ireland goalkeeping coach Alan Kelly has distanced himself from stories leaked to the British media this week of an allegedly ‘anti-British’ video shown to the squad ahead of last week’s friendly defeat to England.

An English paper printed the claims, attributed to ‘numerous sources,’ that several members of the Ireland set-up were ‘shocked’ by a video depicting scenes from Irish history alongside footage of past meetings between the sides.

The FAI announced that they are to look into the clams ‘as a matter of urgency’ and coach Stephen Kenny met with acting CEO Gary Owens on Friday.

Kelly, who opted not to travel with the squad from Britain for the final UEFA Nations League game against Bulgaria, has been implicated by some as the source of the leak.

The former Ireland, Blackburn Rovers and Sheffield United goalkeeper, who was the only staff member to stay on following Mick McCarthy’s departure, said ‘enough is enough.’

In a statement made through his personal social media, rather than his employer, Kelly angrily denied ‘the narrative and innuendo created by the media.’

"I recently made a difficult decision to put my health first and football second as I continued to work, travel, eat and sleep in camp with the Republic of Ireland national team during the recent international break," he said.

"Covid-19 was present in the camp and continuing to spread from person to person during this period.

“I made the decision to ‘sit out’ the last match because the risk was becoming too high for me as an asthmatic.

"I am now absolutely furious and disgusted with the narrative and innuendo being created in the media that this decision is somehow linked with stories leaked to the press out of OUR dressing room.

"I can say, with 100% certainty, that I have never bleated to the media in 35 years as a player and coach and I've been in some pretty interesting dressing rooms.

"This narrative is wholly and totally wrong and it should beg the question, who is spreading and benefiting from this?

“What I can say is it's not me. I have been a loyal servant to Irish football for over 30 years and to now find my name and reputation being dragged through the mud is shameful.

Full-back Enda Stevens, who missed the games through injury and wasn’t present when the offending video was alleged to have been played, also denounced the link.

“I think it’s disappointing it’s come out to the media, in the way it’s been leaked,” the Sheffield United defender told the Irish Times.

“What happens in a meeting, in a changing room – right or wrong – should stay there. It’s always been the case.

“I haven’t heard anything about the meeting, the lads in the meeting haven’t raised any awareness to it, so as far as I’m concerned, I don’t think there’s anything in it.

“I don’t think any players even noticed, because nothing’s been said. We have a WhatsApp group, but nothing has been raised.”