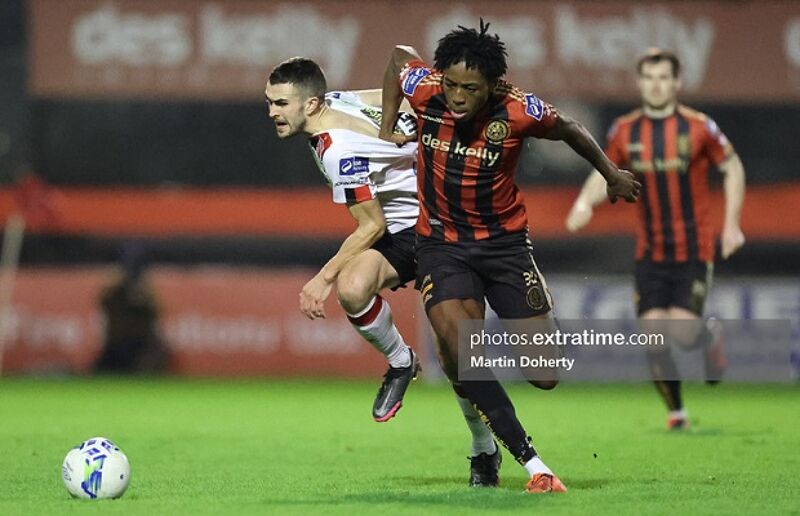 Dundalk prepared for the midweek visit of Rapid Wien in the Europa League by booking a place in the FAI Cup semi-finals thanks to a 4-1 win over Bohemians at Dalymount Park.

A brace from David McMillan and one each from Michael Duffy and substitute Nathan Oduwa saw the Lilywhites set up a meeting with Athlone Town next week.

Filippo Giavagnoli's side host the Austrian side at the Aviva on Thursday but they will have another Lansdowne Road date in sight three days later as they travel to the midlands.

Andre Wright had levelled from the penalty spot during a frantic opening period in Phisborough that saw Duffy fire the visitors in front inside two minutes.

The Lilywhites played with an intensity lacking in recent weeks as the relentless fixture schedule, including the first three of their six Europa League games, took their toll on the squad.

Manager Filippo Giovagnoli was without Sean Murray, who has scored three goals in Europe this season, and top scorer Patrick Hoban, who undergoes ankle surgery on Monday.

Nevertheless, he had arguably the league’s second most-lethal marksman as a replacement in the form of McMillan, and he dovetailed nicely with Duffy in the opening moments.

The former St Johnstone striker opened up the Bohs defence with a lovely outside-of-the-boot pass to find the bending run of Duffy, and the Derryman found the corner from close range.

Duffy has been below his usual high standard this season but, having missed out on an international call this week as his paperwork has yet to go through, he appeared back to his rampant self.

He was the architect of the penalty that led to Bohs’ second from the penalty spot, but first Bohs would equalise with a spot-kick of their own.

Conor Levingston’s free kick bounced unkindly and struck the hand of Chris Shields in the box and Wright, only just, squeezed his penalty into the corner past Gary Rogers.

Despite their slow start, Bohs worked their way back in looked capable of going in front as the break approach, only for a moment of Duffy skill to prove their undoing.

The winger, playing in a more central role alongside McMillan, took out Michael Barker with a clever backheel and nudged the ball past Keith Buckley before falling under the challenge.

McMillan dispatched the spot-kick emphatically and, within minutes, he would be celebrating his second and Dundalk’s third of a frantic first half.

Duffy hooked the ball in from the endline – it was a marginal call but it looked over – and the Templeogue man met it with a bullet header to leave James Talbot beaten all ends up.

With a two-goal cushion to mind, Dundalk were happy to sit in in the second half and invite Bohs to break them down, with the dazzling Danny Grant the home side’s main threat.

It was a defender, Dan Casey, who forced Rogers into the save of the game, however, the Meath man sticking out a giant claw to sweep away a goalbound effort as he fell backwards.

Rogers denied the same player’s header moments later and sustained an injury in the process, but he dusted himself off, as did his teammates.

And when Barker saw red for a second booking – stretching to tackle Chris Shields following a loose touch – the game was all but ended as a contest.

Substitute Oduwo underlined the point four minutes from time, within moments of his introduction, to tap home Duffy’s cross from close range.