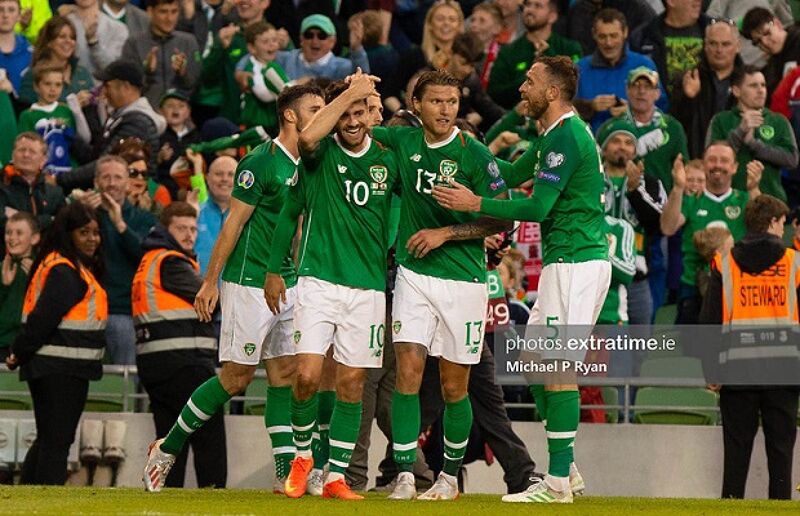 Stephen Kenny’s interminable wait for a first win as Ireland manager will continue in 2021 as his side were held to a scoreless draw by Bulgaria in their final UEFA Nations League tie.

Familiar failings in front of goal were on show as Ireland failed to record a single effort on target – though Robbie Brady’s first-half free kick did force Bulgaria keeper Martin Lukov into a save.

Brady – who had one of his brighter games in a green shirt for some time – also hit the bar with a fantastic long-range effort that perhaps deserved better, but it was slim pickings for Ireland.

Indeed, Bulgaria may point to their own missed chances, particularly a missed chance for defender Kristian Dimitrov in the second half when it looked easier to score.

It brings to an end a torrid international window that saw almost a full matchday squad withdraw with injury and illness, though fans may ask why Kenny waited 67 minutes to use his bench here.

The team contained only three players to start the corresponding fixture in Sofia two months ago – captain Shane Duffy, Darren Randolph and Conor Hourihane – but the similarities were myriad.

Ireland passed the ball well in the early stages but Bulgaria were content to allow them to do so, provided it was in their own half.

It would take 16 minutes for Ireland to threaten the Bugaria defence as Ronan Curtis’ cross was deflected by Kristiyan Malinov and looped out of the reach of James Collins.

The Luton Town striker will have better days in front of goal – he will feel he had at least three clear chances to find the net against the opposition when he broke his international duck.

Duffy is another who will be glad to see the back of a tough window and his underhit pass presented Aleksandar Tsvetkov with a half chance but Kevin Long covered to spare his skipper’s blushes.

Another poor pass, this from Jason Knight on his full debut, played in Dimitar Iliev. He did get his shot away but the deflected effort presented no real problem for Randolph.

Dara O’Shea, preferred to Cyrus Christie at right back, showed what he can do in the attacking third with a well-judged cross for Collins but he was well-marshalled by Dimitrov.

Dimitrov got on the end of a Spas Delev corner at the other end and he perhaps should have done better than head onto the roof of the net.

Lukov was called to make his only save of the game when Brady’s inswinging corner missed everyone and skipped up in front of the keeper, but he palmed it away comfortably.

And Collins really should have opened the scoring six minutes before the break when Daryl Horgan turned his way this way and that before clipping in a perfect cross the striker headed poorly over.

Ireland started the second half on the front foot and Collins headed another O’Shea cross over before meeting the full-back’s low cross and turning it into the side net.

Curtis had the second big chance when Jason Knight drove infield and picked him out in space in the box but, with just Lukov to beat, he panicked and skied his effort.

Bulgaria should have led as a corner found its way to an unmarked Dimitrov at the back post but Duffy did just about enough to put the defender off.

Kenny introduced Josh Cullen and then Jack Byrne and they provided additional spark in midfield in the final quarter.

Within a minute of his arrival, a quick Cullen free found Brady, who cut inside a smashed a wonderfully-struck effort onto the bar from 20 yards.

Troy Parrott, Sean Maguire and Cyrus Christie joined the action for the final five minutes plus stoppage time but the changes were too little too late and Ireland finish 2020 winless.

ExtraTime.ie Player of the Match: Robbie Brady (Republic of Ireland).