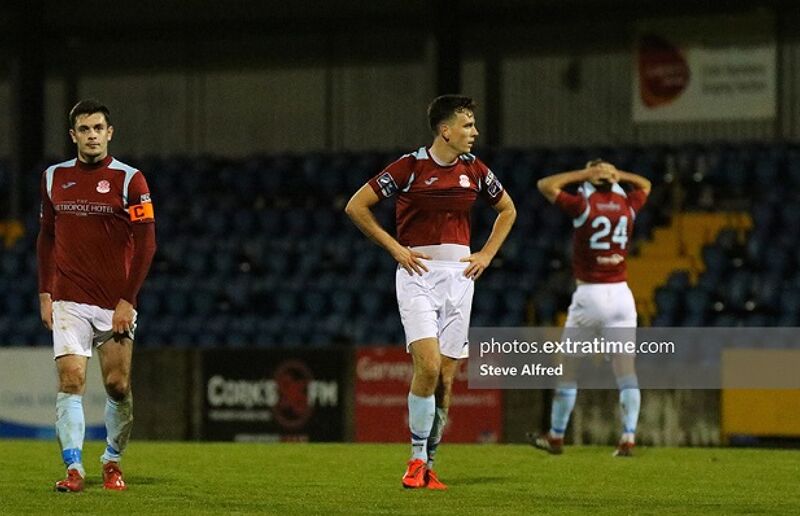 A 0-0 draw against Shamrock Rovers II wasn’t enough for Cobh Ramblers to clinch a place in the First Division playoffs on Tuesday evening at St. Colman’s Park.

Even though results went their way throughout the First Division, especially with Galway’s draw against UCD and Cabinteely’s loss to Drogheda, Stuart Ashton’s side did everything but put the ball in the back of the net for the three points.

Cobh started the game at a frenzied pace. Darryl Walsh swung in an early cross for Conor Drinan who narrowly missed the target. Stephen O’Leary had a furious attempt from distance which was caught easily by Leon Pohls.

While the home side dominated the first half in search of that all important goal, the Hoops were able to push forward and create chances.

A back heel from a corner led to cheers, but the ball had hit the side netting. Moments later Rovers thought they had a penalty after, but John Ryan was given a yellow card for simulation.

A free kick from Adam Emakhu went close, but it didn’t panic Sean Barron in goal for the Rams.

Ian Turner, who won the First Division with Cork City in 2011, had a shot go narrowly wide from the restart of the second half.

Chances built up for the Rams, but each and every time the Hoops were saved by either a combination of their defensive rigidity or the tiniest or margins.

Pohls was fantastic in commanding his area and rallying the Rovers defensive line. On top of this he produced an excellent save to deny Pierce Philips midway through the half.

The chance, where everything seemed to stop and slow down for Cobh, fell to Drinan at literally the last second of the game.

The Carrigaline local swung his head, sure to have put his side into the play-offs, but instead the ball dropped wide, and the Rams were left holding their heads in frustration.

The final whistle pierced the tension and Cobh were left in disbelief after doing everything possible to put the back of the net.