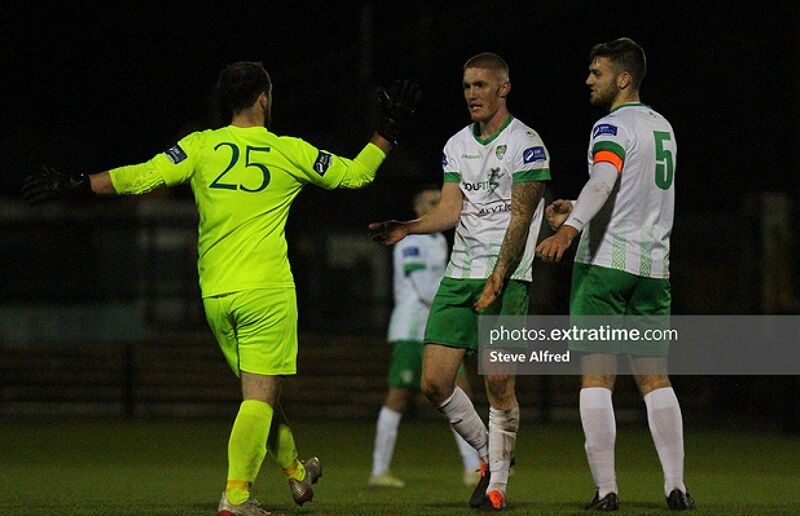 Pat Devlin’s Cabinteely will be looking to continue their impressive recent run of form against Longford Town when they welcome the Red and Black to Stradbrook on Friday evening (kick-off is at 7.45pm).

The Green and White’s head into the game fresh from a morale-boosting late win over Cobh Ramblers last time out.

And after going close on a number of occasions during a strong second-half display, they were rewarded for their efforts as Kieran ‘Marty’ Waters netted an injury time winner.

“There is a lot still to play for with several clubs involved,” Pat Devlin told his club’s media team.

“We need to get wins; we need to play well; we need to be organised and disciplined. And we need a little bit of luck.”

He added: “The players were great last week in Cobh. Each game itself will bring more importance. Our focus is on Longford and doing our best to get all three points.”

They now welcome a beleaguered Longford Town to Stradbrook, a side who they have lost against just once at their home venue.

The South Dubliners also came out on top the last time both teams met, running out comprehensive 3-1 winners over Daire Doyle’s charges.

In terms of team news for tomorrow evening’s game, Cabinteely welcome back Shane Barnes to the fold following a recent suspension.

After succumbing to a dismal 6-2 defeat at home to Galway United last week, Longford Town will be eyeing their second win in the capital on the spin when they visit Stradbrook.

Town have a wretched recent run of results against Cabo – winless in their last six games – and they will be out to right that wrong this weekend.

The Red and Black raced into a two-goal lead last week against Galway United through goals from Adam Evans and Rob Manley.

However, their lead was halved just before the break by Marc Ludden, and it would soon fall apart in the second-half for Daire Doyle’s charges.

Ludden grabbed his second just moments into the second-half, before Carlton Ubaezuonu put the Tribesmen in front before the hour mark.

Five minutes later he put John Caulfield’s side two-up to make it 4-2, while both he and Wilson Waweru bagged late on to complete the rout.

The result all but ended Longford’s feint hope of clinching the First Division title, but they do remain in third on goal difference, however.

Longford have not confirmed team news as of yet but they are expected to have a close to fully fit squad to choose from.

Longford Town have failed to defeat Cabinteely in any of their previous six competitive outings against one another.

The Red and Black have only ever won once at Stradbrook – with their sole win at the South Dublin venue coming in September 2017.

Cabinteely have not won any of their previous four home league games, with their last victory at Stradbrook coming against Cobh Ramblers on August 14th.