Callum O'Dowda: In the meetings we are well drilled in attacking play 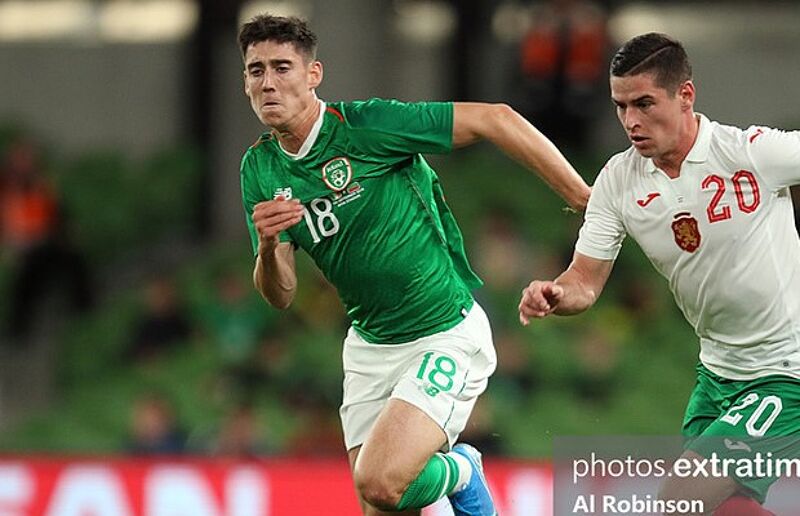 It hasn’t always been the easiest start to Callum O’Dowda’s international career. He was given his first cap in a World Cup qualifier against Moldova in October of 2016 by Martin O’Neill. Since then, he’s played 19 more times for his country but has found it difficult to nail down his place in the team. Since Stephen Kenny has come in however, O’Dowda has started both matches and was growing in confidence before being taken off after an injury against Finland last month.

Back following a lay-off after his injury, O’Dowda is confident of being fit for Thursday’s crucial match against Slovakia. “I went through all the rehab to make sure it was right and I started training about 8 or 9 days ago,” O’Dowda says of his injury.

“I probably wasn’t ready to go for the game before against Nottingham Forest but I’m feeling fully fit now.”

It’s been difficult for the Irish squad following Kenny’s entry as manager. Having only had two games and less than a fortnight of training sessions together, it’s been difficult to transform the teams style of play in such little time.

“It’s a bit tough when you go into a new camp with a group and you’re trying to get across your philosophy,” O’Dowda said of Kenny’s time in charge, “I’ve had phone calls with the manager and Zoom meetings and the more training sessions we have and the more meetings, it’s only going to get better. It's tough because it’s a new philosophy but we’re going to be even more prepared for this game.”

O’Dowda was very quick to highlight Kenny’s man management skills as a key aspect of his leadership style and his ability to turn the team's fortune. Another critical aspect to Kenny’s potential success as manager has been his attention to detail. “In terms of the attention to detail it’s the set plays and everything, no grey areas,” he said of Kenny’s management.

“In the meetings we’re well drilled in attacking play, defensive play, build-up play from the back, starting position; whether it be goal kicks or set pieces and I’d say we’re going deep into the detail not in the sense of being robotic but in saying to the players, ‘you’re good players, you do how you do’ and while my game is going to be different to say Aaron Connolly’s it’s about having that instinct in the final third.”

The players are well aware of the positive impact a victory on Thursday could have on fans back at home, of which many are struggling with the ongoing Covid-19 pandemic.

“I think not having the fans in the stadium, I know it’s so difficult because of what’s going on in the world right now, it’s tough but we always constantly need to remind ourselves because it’s not the same when there are no fans in the stadium”.

Despite having played as part of teams that have battled for promotion, O’Dowda admits that Thursday is one of the biggest games of his career so far. “I had a chance to go to the Euro’s four years ago and the feeling around the camp then was unbelievable” O’Dowda recalls of 2016.

“I came into the setup and everyone was so happy, confident going into the camp and I just wished I was on the plane. I don’t think I deserved to be there anyway because I think the players that got the team there deserved to go but I just wish we can get there again.”