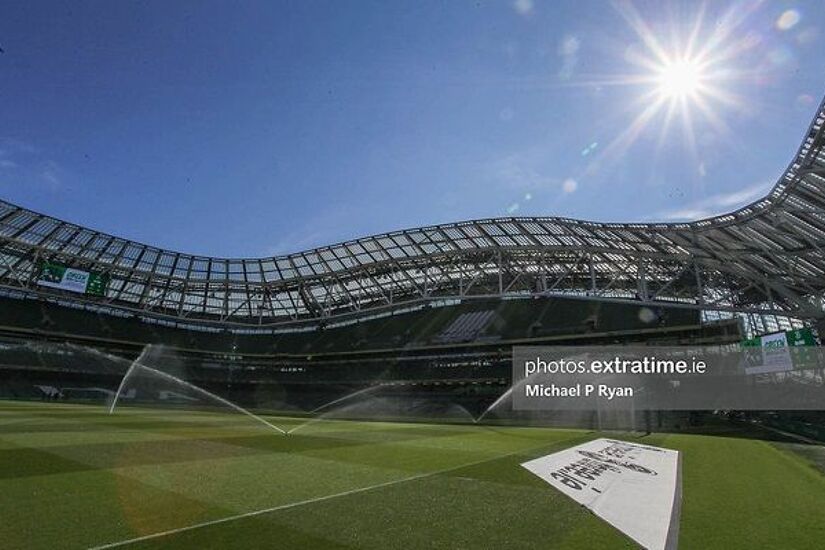 Dundalk -v- KI Klaksvik - Where can I watch it and what do I need to know?

Dundalk will be looking to reach the Europa League group stages for the second time in their history when they take on Faroese side KI Klaksvik at the Aviva Stadium this evening (kick-off is at 7.30pm).

KI, and no other Faroese side, have ever reached the Europa League play-off round previously, and they will be hoping to become the first to reach the group stages on Thursday evening in Dublin 4.

KI dropped into the Europa League qualifiers after losing to Swiss side Young Boys – but they have of course knocked out Georgians Dinamo Tbilisi in their last Europa League outing with a 6-1 win.

Incredibly, KI only had only 29% of the ball in the possession stakes against Dinamo Tbilisi – yet they still managed to score six.

Dundalk have only won once in any of their previous five visits to the Aviva Stadium, with their most recent win at the Lansdowne Road venue coming over Cork City in the 2018 FAI Cup Final.

KI Klaksvik are unbeaten in their previous eight league games – with their last defeat coming on July 12th against B36 Torshavn.

However, KI are second in the Faroese top-flight to HB Torshavn, trailing HB by seven points, although they have in fact played a game less than their title rivals.

Maurizio Mariani from Italy will referee the tie.

The game will be played behind closed doors.

The game will be shown live on RTE 2.

Who should I watch out for?

The Klaksvík squad is made up of mostly Faroese players with a smattering of foreign imports.

Striker Pall Klettskard could be a dangerman after he bagged a hat-trick in the 6-1 defeat of Dinamo Tbilisi in the last round.

Joannes Bjartalid who plays attacking midfield or wide is another to look out for. The 22-year-old has 13 goals and 13 assists in 20 league games this season.

As for Dundalk, they will be without talismanic central midfielder Chris Shields, but it is expected that Greg Sloggett may drop into the role vacated by the ex-Bray Wanderers man.

Sloggett of course played in a deep midfield position for UCD in the First Division so he does have experience in that area of the pitch.

Patrick Hoban will be expected to lead the line for the Lilywhites, while David McMillan may be called upon as a substitute also.

Michael Duffy may also be asked to play a key role in Dundalk’s task this evening – with his trickery and pace on the left-flank – especially considering the defensive strength of the Faroese champions.

Dundalk will see defender Andy Boyle return to the squad after missing out on the win over Sheriff Tiraspol with suspension.

However, Chris Shields will miss out after being booked last week against Sheriff, while Sean Gannon is rated as a doubt as Dane Massey remains out.

The Faroes have yet to disclose their team news.