Opinion: A rising tide lifts all boats - but rivals fans are justified to hope Dundalk fail in their Europa League bid 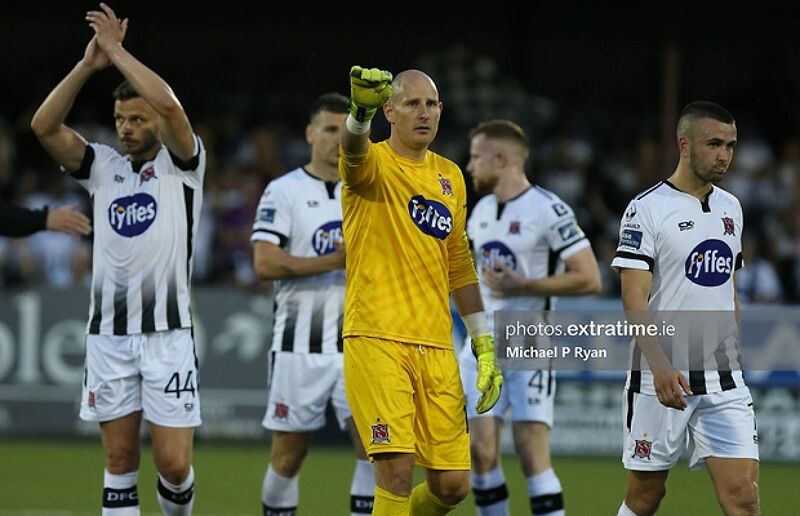 Tonight Dundalk face KÍ of the Faroe Islands at the Aviva in a one-off play-off for a place in the group stages of the Europa League.

Should they succeed, the Lilywhites will become the first Irish side to twice qualify for the group stages following the success of Stephen Kenny’s side in 2016.

No Irish side has ever had a better chance to reach what remains relatively unfamiliar territory for Irish football.

Shamrock Rovers travelled to Belgrade in 2011 to play Partizan with an away goal deficit, while Dundalk in 2016 faced serial Champions League participants BATE a goal down.

On both occasions, the Irish side overcame the odds to make history, but today the Lilywhites will need to cope with the pressure of being favourites on home-ish turf.

It’s natural, then, that fans of League of Ireland clubs would debate the positives and negatives of just what a Dundalk win would mean for the league as a whole.

Well-worn arguments will play out about whether a Dundalk win will lead to them dominating the league financially, and thus ensuring a BATE or Rosenborg situation.

Others will argue a rising tide lifts all boats, and a strong Dundalk will raise the collective standard – bring better teams in the league and, maybe, distribute some of that money through transfers.

Some just can’t stomach seeing sides they’ve watched on a yearly basis play their team, in various states of fortune and misfortune, do well. And that’s OK.

All arguments have their merits and demerits and, boringly, this article won’t make any effort to establish which is empirically the best.

What’s clear is that a certain number of League of Ireland fans, perhaps even the majority, will be rooting for Dundalk to lose on Thursday night – even if the league as a whole suffers.

This is not a trivial argument – Dundalk qualifying for the group stages and doing well could go a long way towards ensuring the League of Ireland keeps its three Europa League spots.

Up north, the Irish League has not been so fortunate and this year entered just two teams in the Europa League, while Linfield had to contest the preliminary round of the Champions League.

Yet many fans of Shamrock Rovers, Bohemians, St Patrick’s Athletic, Derry City and others will hope Dundalk are cut down to size by the Faroese.

For Rovers fans, the motivation is obvious. They want to win the league and don’t want to be overtaken in the Europa League qualification stakes.

Fans of other teams will join them, too, however, for whom the idea that they need to don the green jersey (or the Lilywhite even) and support an Irish team is anathema.

Fandom is complicated but it’s also pretty simple at the same time: everybody wants a stronger league but they don’t want to be left behind.

A strong Dundalk with €3 million-plus European revenue would give Filippo Giovagnoli’s side an undoubted advantage.

Both sides had their problems in the aftermath as a result of outside events – Rovers lost Michael O’Neill immediately after their exit and Stephen Kenny departed a year ago.

So finances don’t mean everything in the League of Ireland, but they do mean something, and fans of rival clubs know a rising tide lifts some clubs more than others.

It’s only seven years since St Patrick’s Athletic won the league title and eight since Sligo Rovers did, while Cork City competed for years before sealing the double in 2017.

They couldn’t have done that without a competitive league accessible to any team that gets a bit of momentum behind it – and, crucially, financial stability.

A windfall being bestowed on any leading club can only distort that structure and help to encode a league of haves and have nots.

Look around Europe and see teams like Fredrikstad and Viking in Norway, KB in Demark and Dinamo Minsk who have been supplanted by one club that became dominant in a short period of time.

Yes, the success of Rosenborg, Brondby, Kobenhavn and BATE have brought up the collective standard of those leagues, but has that helped their rivals?

Would Shamrock Rovers or Sligo Rovers fans celebrate a stronger domestic league, and better performances in Europe, if it meant Dundalk winning the league every year?

Do Sligo Rovers or St Patrick’s Athletic celebrate their titles in 2012 and 2013 respectively any less because Shamrock Rovers were in crisis and the competitive standard dropped as a result?

Fandom is complicated, but it’s simple at the same time: most fans would rather see their team at the top of a weaker league than struggling in a strong one.

It’s not a lack of patriotism or even a lack of love for the league – they’re fans and they want to see their team win.

So if KÍ win on Thursday night, and fans of teams other than Dundalk celebrate, it’s not because they don’t care about the league – they just care about their team more.