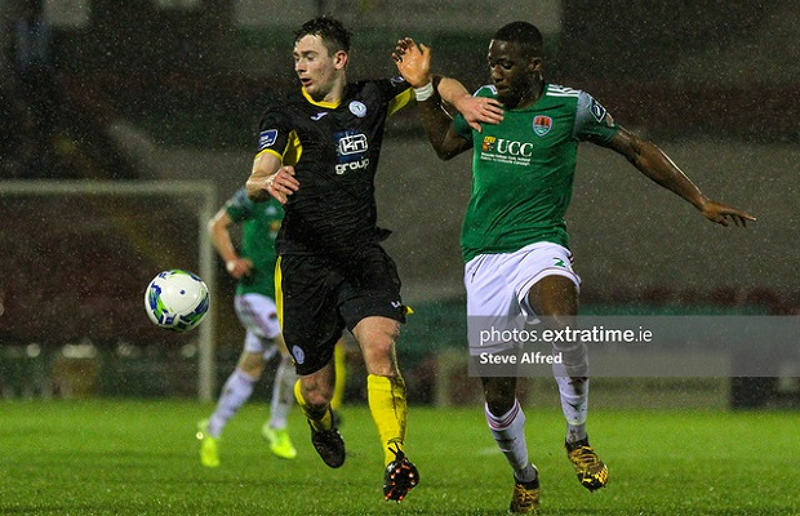 If either of these sides needed a carrot to avoid automatic relegation, it’s presented in Finn Park tonight as Harps host Cork City in a potentially pivotal clash (kick-off 5pm).

Both teams sit parlously in the bottom two spots, Cork bottom and Harps one point above in the play-off spot, five and four points adrift respectively of safety.

Harps come into the game with some reason for optimism, having secured a point in each of their last two games, at home to Derry City and away to Shelbourne.

They will consider themselves unlucky not to have taken all three points at Tolka Park after playing the final 15 minutes with an extra man following Luke Byrne’s red card.

The Ballybofey side trailed to a first-half Ciarán Kilduff header but deservedly levelled after the break thanks to talisman Barry McNamee.

"Cork are a good side despite their league position. It's a very strong league this year and there’s a lot of quality up and down the table.” Horgan told the club’s official website.

“They got a good point themselves at Shelbourne a couple of weeks ago so there isn’t much between the teams and it’s going to be a very close game."

Defender Stephen Folan added: “The first half at Shelbourne we didn’t start at all and didn’t get into the game until the second half.

“It shouldn’t take a rollicking at half time to get us into gear. Hopefully we can get a couple of goals and keep a clean sheet so we have something to build on for the rest of the season.”

Horgan himself is suspended, as is defender Dave Webster, while Mark Timlin is injured and Ruairi Harkin and Mark Russell doubtful with knocks.

Cork City make the long trip north to Ballybofey with a degree of trepidation, but also the whiff of opportunity as a win will take them within two points of eighth spot.

It’s been a trying couple of weeks for the Rebel Army following the passing of John Kennedy, an ever-present friendly face and dedicated volunteer with the club.

City haven’t played in two weeks owing to the postponement of last week’s game with Dundalk ahead of the Lilywhites’ Europa League triumph in Tiraspol.

The previous week witnessed a comprehensive 3-0 defeat to Shamrock Rovers as Aaron Greene struck twice in the first half before Neil Farrugia wrapped up the win late on.

Manager Neale Fenn gave caution ahead of the game, noting that losing would be a disaster, if not quite a season-ending one.

"It’s definitely a must not lose game,” Fenn told the club’s media team.

“I don’t think it will end the season either way, if we win or lose it. It’s certainly a game we will go up and do our best in.

“I’ve listened to a lot of people say that Finn Harps are better equipped to win these types of games than us.

“So they’ll be looking at it thinking that Harps will be expected to win it, so it’s nice for us to not have the pressure on us.”

“Not having a game last weekend gave us a little bit of time to some more bodies available to us.”

Midfielder Cian Coleman added: "Every game until the end of the season will be huge, but this one is massive because of the position that both teams are in.”

Joseph Olowu, Alan Bennett and Cian Bargary could return from injury, but Uniss Kargbo looks set to miss out, as does quarantining Kit Elliott and suspended Henry Ochieng.

City and Harps have met once this season, at Turner’s Cross in February, where Alec Byrne’s goal earned City their first win of the season and Harps their first defeat.