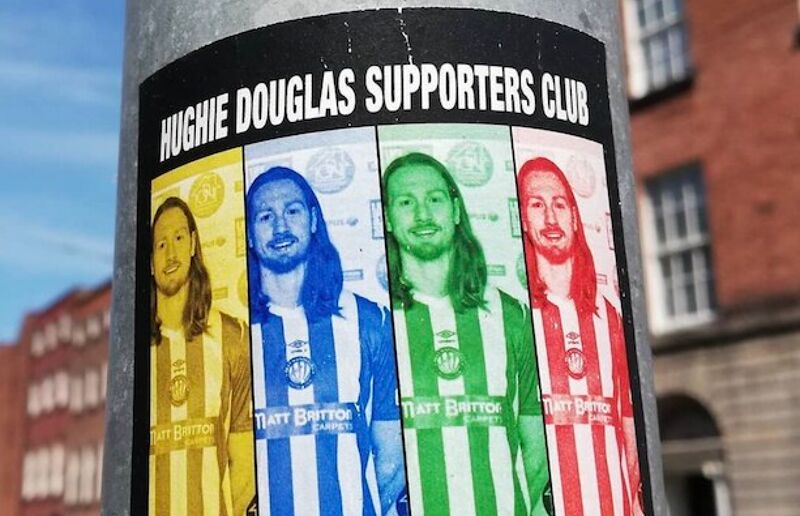 I've developed a strange habit in recent months photographing football stickers that are placed around the Dublin streets.

I get strange glances as I pause mid stroll, pointing my camera at a lamppost or an electrical box. Sometimes people walk over afterwards to check what I was doing. It’s all, I promise, in the name of an interesting new marker from fans of Red Star Belgrade, or PSG.

Football stickers are a ubiquitous part of urban football culture, and I don’t mean Panini. ‘Making your mark’ on the streets of a city by splashing your team’s colours on its shoddier surfaces is not new, and arguably a little territorial and childish, but what it does do is offer a strange kind of insight.

You’ll never find a Rangers sticker in Dublin (well, I did once, it was tiny and placed high up and the least popular I’ve ever included on my account). German teams are everywhere. Occasionally, a spattering of new arrivals from South America adds colour.

In truth, I didn’t really notice the team brandings that adorn our city streets all that much until my young son started searching for the designs he liked as he walked to school. They seem to fall mainly into three categories: football, music, and politics, and in a weird way you can trace the fan culture of Irish football through what’s happening on those lampposts.

So I started doing just that, by sticking them on Instagram.

I’ve been following the footsteps of fan groups visiting in the Europa league, through the heaps of SK Brann stickers plastered all over Dame Lane, or the thinner trail of oblique references on Norrkoping’s stroll from the city down to St Patrick’s Athletic.

My little Instagram account even briefly became an information gathering spot for people looking to cover up their rival’s stickers. After a string of “where is that” type questions, I’ve stopped putting exact locations on the posts, because, well, nobody needs that kind of pettiness!

So after starting to take photographs to give my kid some leftfield entertainment, I’ve become kind of hooked. There’s some great surrealist art to be found: Bohs fans odd connection with Area 51 and less odd one with communist symbolism, for example, or the clamours for Welsh independence that seem to take precedence amongst their fan groups, and can be found all over Temple Bar.

The markings also paint a picture of Dublin’s visitors. Away from the teams that actually come to the city, there’s a lot of markings from tourists - little renewed at the moment, for obvious reasons - that see New York Cosmos badges on the signage for Dublin Castle, and absolutely loads of German clubs represented all over the city centre, from Bayern to perhaps the most common markings of all, those of socialist-leaning Hamburg club St Pauli.

What’s the point? Well, arguably there isn’t one, apart from giving me something to do, but I do find it strangely comforting in a time without travel. Some will see the whole thing as a mild form of vandalism (in fact, Dublin City Council have recently been looking into anti-stick paint).

For me, though, it’s a splash of colour and a scream of ‘I was here’ that goes just a little bit deeper. It’s a little tribalism that’s typically (though not always) minus the nationalism, and in a time where our horizons are narrowing, a reminder of what once was, and hopefully will be again.

And no, I don’t have any Bohs stickers to sell.

John Caulfield: 'We didn’t do enough and we didn’t penetrate enough'

Andy Myler: ‘If we have any aspirations of doing anything serious in the division this season, we're going to have to play a bit better’