Five talking points from Ireland's 1-1 draw away to Bulgaria 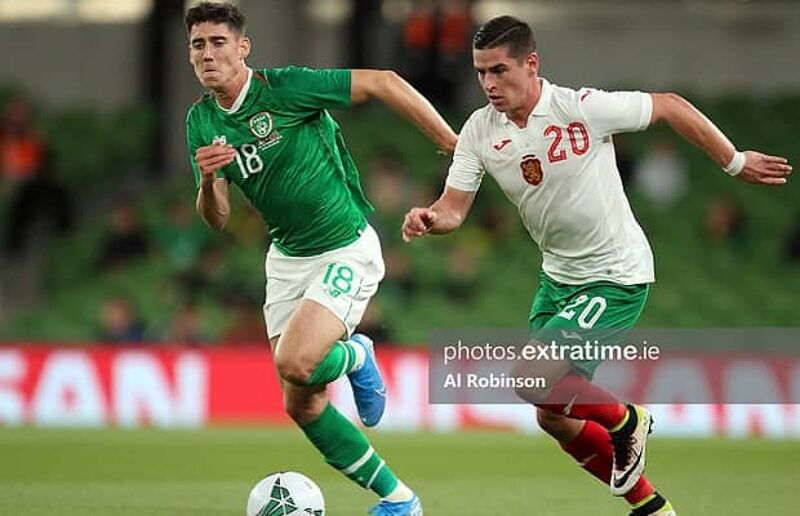 A trademark set-piece leveller from the towering Shane Duffy in the 93rd minute gave Ireland a share of the spoils in their Nations League opener against Bulgaria on Thursday evening.

With pre-season only weeks old, just two full training sessions and a host of new players, new staff and new ideas, it's going to take time.

Here are a few talking points and observations from tonight's game in Sofia.

Ireland started the game positively, with great pace and a real hunger to get on the ball. Most impressive were the two wide players, Aaron Connolly and Callum O'Dowda, who looked dangerous in attack for Ireland.

Connolly was nippy and interested in every slight chance he could see. He nearly found himself through on goal from Hendrick's first half deflection only to be flagged offside. He could have easily left it go as a lost cause but chased it all the way.

O'Dowda is just off the back of a very impressive season with Bristol City and looked lively in attack. Although notably quiet this evening, Doherty and himself could form a bright and productive partnership on the right.

Matt Doherty, following a marathon 13-month season with Wolves, has had one of the busiest weeks of his life.

On his return from a well-deserved holiday, the Dubliner was whisked off to London to seal a dream move to Jose Mourinho’s Tottenham Hotspur.

He had barely clicked delete on his Arsenal appreciation tweets, as seen in a video produced by Spurs on his signing, that he was back in the airport and on his way to Dublin to join up with the Ireland camp.

There will always be the argument that they are handsomely paid and it all comes with the job, but with such a busy week for the Dubliner would it have made more sense to start Seamus Coleman?

Doherty is one of the strongest players Kenny has at his disposal right now, and his performances are only going to get better with his move to Spurs.

But the excitement, clamour for his inclusion and freshness of the news may have proved a distraction for Doherty with a subdued performance from the defender this evening.

The debutant had a mixed evening. He started well and was busy in around the box. He showed good awareness to tee Hourihane for a shot from distance early.

But it became very clear as the evening progressed that Idah will need a lot more support close to goal if he is to excel on his own with that formation.

His goalscoring record is exemplary in the last number of years and he has shown his quality as a footballer this season with Norwich.

To get the most out of the Cork man, and maximise the efficiency in front of goal, he needs much more support.

Once again Ireland strike at the death to take a share of the spoils, which is not easy to do again and again.

Although it's early days and there is a lot to work on, once again you have to admire the character of this Ireland side.

They didn't deserve to go behind and were much the better team over the full 90 minutes, so to go behind from Bulgaria’s first real chance of the game was harsh.

They responded well and continued to string some positive passages of play together as the second half progressed.

They could just as easily let their heads drop and wrote off the evening prematurely, especially three minutes into injury time. But, credit where it's due, they persisted and got the goal they deserved.

Shane Duffy's game-time has been limited in recent months and as the game progressed and the legs tired this evening it was telling.

Duffy has developed into one of Ireland's most consistent and most important players in recent years and it was a real shot of confidence from Kenny to reward him with the captains armband having lost his place recently enough with Brighton.

He is a natural choice with Coleman not involved, but Kenny could easily have gone with someone different given Duffy's match fitness and game-time have been limited.

Duffy was refreshingly honest after the game, taking fault for the goal and admitting he found it tough at times as he hasn't played much in recent months.

The Derryman is a top professional who should excel at the heart of defence in Celtic Park.