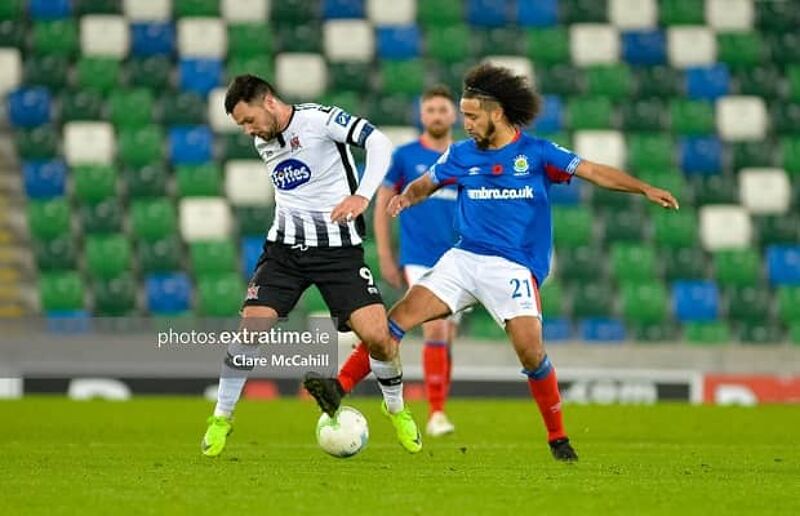 The Legionaries have yet to kick off their league campaign but ran out 6-1 winners over Belchatow in the first round of the Polish Cup on Friday night.

The Polish champions have only reached the group stages of the Champions League once, in 2016-17, but expectations are high.

Legia qualified for the groups on that occasion by beating Dundalk over two legs, drawing 1-1 in Warsaw following a 2-0 victory at the Aviva Stadium.

The one-legged nature of this tie, however, throws up some uncertainty and Legia won’t take Linfield lightly – despite not having much match footage to review.

“We do not have much footage from Linfield FC matches,” said Legia coach Aleksandar Vukovic.

“We have materials from the preliminary round meeting and friendly with Stoke City. They are definitely not a team that we can take lightly.

“We have to be focused and prove on the pitch that we are the better team. This is what counts – everything else is now relegated to the background.

“Experience is important. We don't have to go back far to remind the players what is important in the context of this match.

“We are not the team that is in a better position at the moment, even if that one game is played in our stadium.

“We would prefer to play a two-legged match, but we have to adapt to this situation through maximum concentration. This will be crucial in Tuesday's game.”

The tie itself came under threat on Monday when it was revealed a squad member tested positive for Covid-19 but, having followed medical protocols, the game will go ahead.

The player in question hasn’t been identified but the remainder of the squad is fit for selection, including new signings Artur Boruc and Filip Mladenovic.

Linfield arrive in Warsaw knowing they will have fewer opportunities as good to cause an upset on the European stage.

David Healy’s side came through the preliminary round without having to play their final-round game as Kosovan side FK Drita had to pull out due to a Covid-19 diagnosis.

For a moment, it appeared as if lightning was about to strike twice when a Legia player tested positive on Monday but the game has since been given the green light.

Nevertheless, a one-legged tie, albeit away from home, with the fervent home support excluded from the stadium means there is no pressure on the Premiership champions.

With just the one competitive game this year, a 2-0 win over Tre Fiori in the preliminaries, Healy called in a favour from former Northern Ireland manager Michael O’Neill.

The Blues faced O’Neill’s Stoke City in a behind-closed-doors friendly on Saturday afternoon and were narrowly beaten 1-0.

“It was a good game for us. We’ll take positives from the performance and the fact our players went toe-to-toe with Stoke who are quality opposition,” said Healy.

“Stoke had plenty of possession, but that’s the kind of test we needed before facing a team of Legia’s quality.

“We gave up possession at times because we needed to be disciplined and organised which we were for a majority of the game.

“We stayed compact for as long as possible and it was a chance for us to replicate what we might encounter against Legia.

“When you step up against this level of opposition, you know you might only get one chance in the game, so hopeful we can be clinical if chances come our way.”

Ethan Boyle and Jimmy Callacher both limped off during the tie with Stoke and will be assessed ahead of kick-off.

This is the first time Linfield have met a Polish team in European competition.

Legia have come up against Northern Irish opposition once before, in 1997, when they beat Glenavon 5-1 on aggregate in the Cup Winners’ Cup.