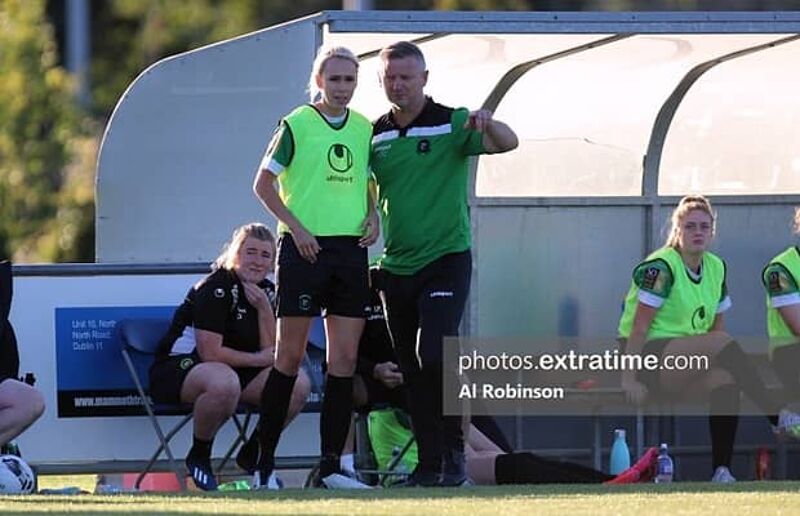 The Women’s National League returned after a more than nine-month absence on Saturday and for champions Peamount United it was very much as you were.

The Newcastle side top the table on goal difference following a comfortable 5-0 win at home to Treaty United, who were competing in their first-ever national league game.

The Peas led 2-0 by the midway point in the first-half as captain O’Gorman finished off a slick move initiated by Ryan Doyle, Chloe Connolly having deflected an earlier chance into her own net.

Sadbh Doyle, making her debut following a move from Galway in the off-season, set up Ryan Doyle to lash home goal number three on the hour.

Another debutante, McEvoy, made four six minutes later with an unstoppable strike that found the top corner of the beleaguered Karen Connolly’s goal.

It was left to Ireland international Roche, returning after a six-year stint abroad in the USA, England and Italy, to round up the scoring with a low shot from outside the box.

Chloe Darby wrote her name into Bohemians folklore as she scored the Phibsboro club’s first-ever goal in competitive senior football.

It was little more than a consolation for Sean Byrne’s side as the FAI Cup holders had already built up a four-goal lead at Ferrycarrig Park.

Ellen Molloy scored a goal in either half on her debut, while Lauren Kelly and Vanessa Ogbonna were already on target for the home side.

Last season’s runners up Shelbourne also registered a comfortable home win on their return to action as Pearl Slattery, the returning Ciara Grant and Rebecca Cooke saw them past Cork City.

Saoirse Noonan pulled a goal back for City with two minutes remaining but there wasn’t enough time for Rónán Collins’ side to mount a comeback.

And the points were shared at Eamonn Deacy Park as DLR Waves’ Katie Malone’s lobbed finish midway through the second half cancelled out the opener from Galway’s Aoife Thompson.

Athlone Town, the only team yet to play, make their bow next Saturday at home to Wexford, while Bohemians host Galway, Shelbourne face DLR Waves in UCD and Cork City host Peamount.