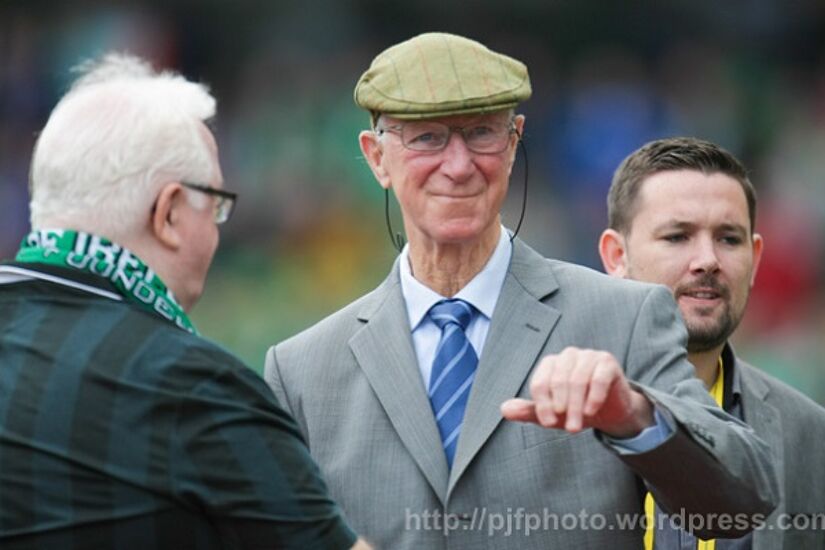 Goodbye to a Legend: Thanks for everything Jack

Jack Charlton outlived his greatest achievement, but only just. For Irish football fans, Italia '90 was a moment in time that stretched to fill decades; only recently has it begun to fray at the edges. Charlton died less than two weeks after the 30th anniversary of Irish football's high-water mark, the quarter-final exit to Italy on June 30th 1990.

As the 30th anniversary made clear, Italia '90 has now passed from vivid living memory into the realm of legend. Its iconic images have been replayed to oblivion, its anecdotes worn threadbare by constant repetition.

Such is the fate of all legends. But for those of us who lived through Italia '90, whose lives were shaped and enriched by it, there are moments when the brittle crust of nostalgia cracks, and the stray sunlight of that summer illuminates our memories, as clearly and brilliantly as when they were new. Jack's passing is one such moment.

Jack Charlton was an unlikely visionary. He was hewn from the bedrock of English football in the 50s and 60s, a fanatically competitive working-class pro who matured into a brutally clear-sighted manager. Nowadays, Jack's generation of “real football men” is routinely sneered at, often by those who know and care far less about the world beyond football than did Jack and his contemporaries.

The story of how Jack – English World Cup winner, as Irish as a warm pint of bitter – came to take charge of the Irish national team is well-known. It's a tale twisted into shape by coincidence, misfortune and farce – always an indication that fate is at play.

Jack's dogged pursuit of perfection – or a slightly perverse form of it – brooked no dissent. His pragmatism was shot through with a streak of cruelty; Liam Brady, perhaps the one authentic genius produced by the game here, felt the brunt of Jack's cold shoulder. There was no hole in Jack's system to fit Brady's left peg, and the playmaker was summarily and publicly cut adrift.

The common charge that Jack distrusted, or actively despised, “flair” players is unfounded. He admired and cherished technical skill, provided it was put at the service of the team. Equally, while Jack saw physical intimidation as part of the game, he deplored outright thuggery. One early cap was permanently exiled from the team for a tackle which Jack deemed to have crossed the line.

If Jack could be irascible, abrasive and petulant, he was also invariably right. His tactical system, so often dismissed as a flagrant waste of a great squad, was deceptively sophisticated.

To watch Charlton's Ireland team today is a revelatory experience, and a recommended one; too many commentators rely on established clichés and childhood memories, which truncate and distort the full picture.

Charlton's football suffers from the same syndrome as the films of Charlie Chaplin or the music of the early pioneers of rock'n'roll, in that its groundbreaking aspects have become utterly commonplace. Only those elements which now seem alien and unsophisticated strike the modern eye.

While Charlton didn't invent pressing, he was the first to bring it to fever pitch. In the late 80s, he identified the full-backs as the only players on the field who had the space to play with total freedom – a fact only coming to fruition now.

Charlton's ethos differed from the sterile, airless cyber-ball of modern coaches – even those who draw upon his pressing tactics – in one crucial respect; he understood and embraced the emotional aspect of the game. He filled the gap between analysis and execution with a visceral and selfless desire to compete, which his teams never lost until the very end.

It is certainly true that in its earliest form, from 1986-1989, Charltonism was a rigid and, at times, an unbelievably crude doctrine. While Ireland's delirious whirl through Euro '88 witnessed some fine football, the early qualifiers for Italia '90 make for particularly gruesome viewing. Midfielders are redundant, as lobotomised defenders lump mindless first-time balls into the corners, to little avail.

But as those qualifiers progressed, Charlton cajoled, bullied and brainwashed his team into the shape he'd been striving for all along. He did so while forging a bond between players and public that was worth a goal's start to a team which, in truth, scored precious few to begin with.

The atmosphere at Ireland's home qualifiers against Spain, Hungary and Northern Ireland – all must-win games, all won – was genuinely unsettling in its ferocity. This was the Irish footballing public described by Eamonn Dunphy in his more lucid moments – drawn from the ranks of the downtrodden and the ignored, faithful to the last kick and - until now - always, always let down.

By late 1989, the corporates were (literally) pitching their tents at Lansdowne; that atmosphere would never fully return. Its echo, however, would carry Ireland through Italia '90 and beyond.

At the World Cup, Charlton proved to be, in his own peculiar way, a flexible and adaptable tactician. He swiftly realised that ceaseless pressing in mid-summer heat was unsustainable. Against the Netherlands, Romania and Italy, Ireland played far more constructive football while sacrificing only a little of their trademark intensity.

By the time the juggernaut ground to a halt against Italy – a far closer game than is generally remembered – Jack's place in the pantheon was secure. A deeply human and emotional man, he was at times troubled, but always moved, by the weight of a people's devotion.

Between 1990 and 1992, Charlton's side hit heights of performance that no Irish team has attained since. By the mid-1990s, the game's tactical compass had shifted; Charlton's could not and would not. It is to his eternal credit that he managed to wring two more nights of unbearable joy from a team in precipitous decline; first in Belfast in November '93, then in New Jersey in June '94.

The era ended swiftly and distressingly; out-pressed by teams as modest as Latvia, frustrated, unbelievably, by Liechtenstein, Charlton's reign ended with an emotional defeat to the Netherlands in an Anfield play-off for Euro '96.

Jack Charlton's contribution to Irish culture and the general gaiety of Irish life was inestimable. It has also been habitually misrepresented.

Much codswallop has been written about the alleged role Italia '90 played in forging a new Ireland. Much more will be written in supposed tribute to Jack over the coming days, by pundits and politicians whose understanding of death is as trivial and self-serving as their appreciation of life.

If Italia '90 did, indeed, point through the gloom of the eighties to a better, brighter future, it was a road ultimately not taken. In stark contrast to the country we glimpsed during Italia '90, the Ireland of the Celtic Tiger was joyless, cruel and exclusionary, driven by the whims and appetites of the elite. It is by no means coincidental that rugby and golf displaced football in the nation's affections once Jack's team went into decline.

Given Jack's ill-health in recent years, it's perhaps selfish of us to feel so bereft at his passing. If his teams gave you hope or gave you pleasure, now is the time to look beyond the platitudes and the clichés, and watch some of the football. Turn off the lights, put away your phone, and remember who you were, where you were and who was with you, when these images first played out.

As Jack's lads thunder around the fields of Stuttgart, Genoa and Wembley, remember that a part of you is still there, tethering you forever to the time of your life. Jack will be there forever too; on the edge of the frame, fidgeting in the dugout, peering from beneath his cap, eternally indignant at the thought of giving up.

He enriched so many lives through football - Tributes pour in as Jack Charlton passes away https://t.co/n7CsqIrz5w pic.twitter.com/9GbawhHV7r