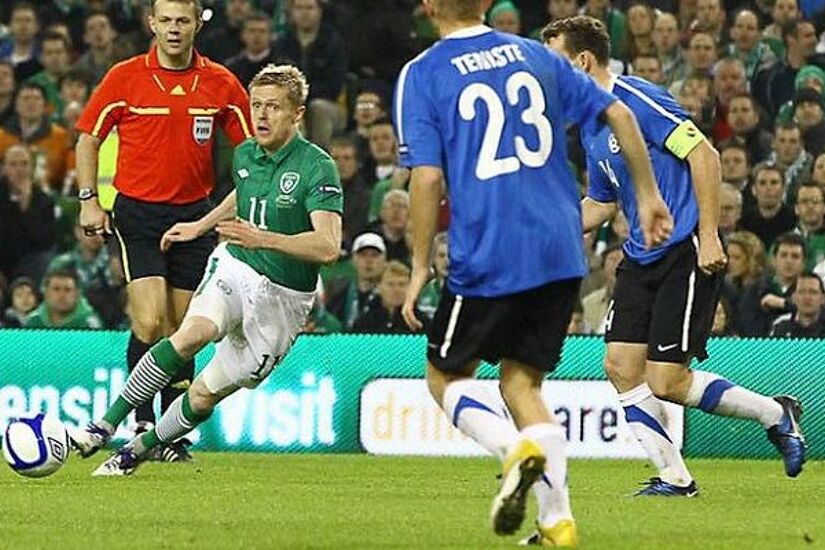 Watch: This day 18 years ago, Ireland set up a World Cup last 16 tie with Spain with victory over Saudi Arabia

It’s 18 years to the day since the Republic of Ireland sealed their place in the last 16 of the 2002 World Cup with a comprehensive 3-0 win over Saudi Arabia.

Goals from Robbie Keane, Gary Breen and Damien Duff sealed a straightforward win and a date with Spain in the round of 16.

Ireland went into the game knowing that bettering Cameroon’s 1-0 win over the Saudis on matchday two would all but guarantee them a spot in the knockout phase.

Mick McCarthy’s side got off to the ideal start in Yokohama as Robbie Keane, the hero in Ibaraki a week earlier, scored his second of the tournament.

The striker checked back to meet a Gary Kelly cross and his well-struck low volley squirmed under the body of Saudi keeper Mohamed Al-Deayea.

It took Ireland until the hour mark to get the all-important second goal, and it was another fine volley from an unfamiliar source, as centre-half Gary Breen hit the net.

Breen lost his marker and met Steve Staunton’s outswinging free kick with a most unorthodox volley that left Al-Deayea clutching at the air once more.

While Germany wrapped up top spot with a 2-0 victory over Cameroon in Shizuoka, Damien Duff made it 3-0 late on as the hapless Al-Deayea produced another howler.

Matty Holland played an inch-perfect through ball for Duff coming in off the left, and the Ballyboden man’s firmly-struck shot was fumbled into the net by the captain.

years ago, Ireland secured a vital Group E win in the 2002 FIFA World Cup...and Damien Duff gave us a bow!

With second place secured, Ireland would go on to face Group B winners Spain in Suwon on June 16th.