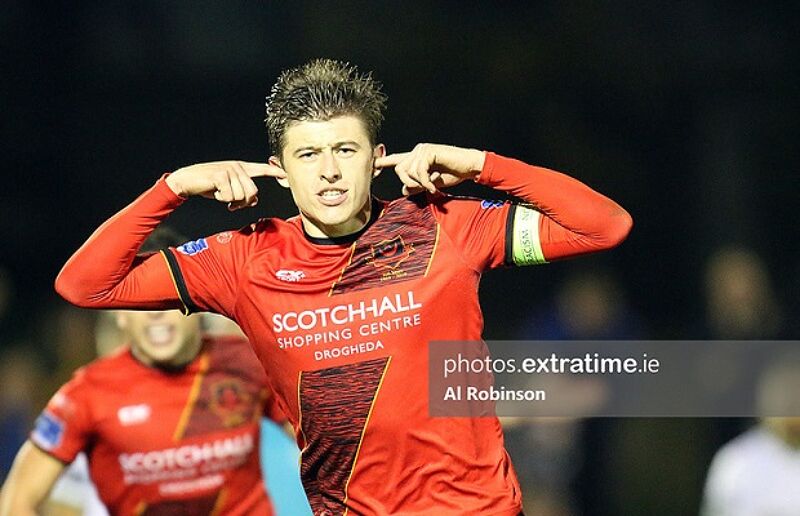 First Division Drogheda United have unveiled the re-signings of midfielders Jake Hyland and Mark Hughes ahead of the 2020 campaign.

Hughes re-signs for Tim Clancy’s side after an impressive 2019 at United Park, making 23 appearances and scoring once.

The 26-year-old made his Boyneside return ahead of last season, after three years away with both Longford Town and Shelbourne.

The midfielder has also re-signed for the club alongside club captain Jake Hyland who made 22 appearances for Clancy and co. last term.

After recovering from a horrific leg break in 2018, Hyland recovered to make his mark at the Windmill Road venue – leading his side to a second placed finish.

However, they were unable to complete the job in the playoffs versus Finn Harps, who eventually edged them out in a titanic two-legged tie.

“I’m delighted to sign back for the club again. It’s a great place to play football at the minute,” Hyland told his club’s media team.

“Obviously Tim and Kev (Kevin Doherty) are big factors in that they are top class and keep a good relationship within the squad.

“We got stronger as the year went on last season so I’m happy to be back and looking forward to getting going again.

“The aim is to get promoted of course like most teams at this stage of the season, but I think with the continuity of the group and the new additions we’ll be right up there.

“Going so close and the overall experience of last year will stand to everyone and hopefully we’re able to get momentum and go one step further this season,” Hyland added.

Drogheda United F.C are delighted to announce that Jake Hyland has signed a new deal with the club.

Since joining the #Drogs in 2016, the 24-year-old Midfielder has made over 90 League appearances for the club.