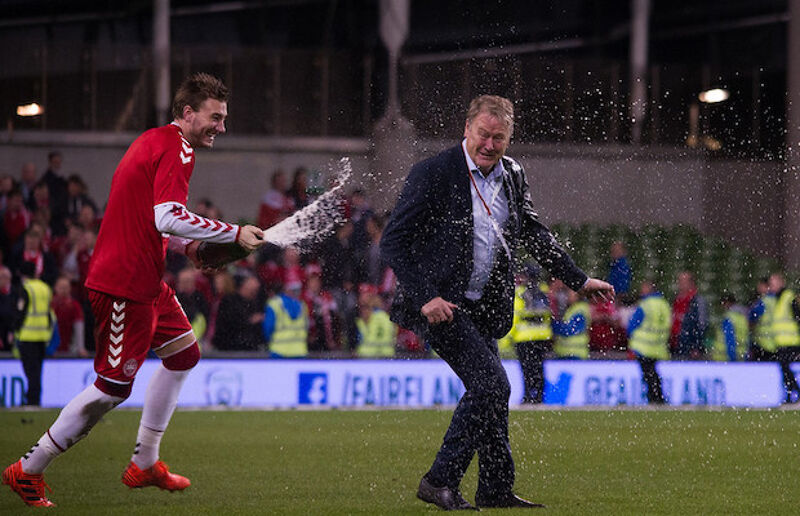 It is is not quite winner takes it all at the Aviva on Monday night. While the Republic of Ireland need a victory, the Danes just need to avoid defeat to make it through to EURO 2020 without the need for a trip to the playoffs next March.

Denmark do only need a point but Ireland have home advantage. At the pre-match press conference there was a lot of talk about respect. There was to be no hostage to fortune comments from Age Hareide, Kasper Schmeichel nor Christian Eriksen on this occasion.

No mention of comparing breaking down Ireland to “opening a can of baked beans with your bare hands” as Thomas Delaney had done on the eve of the World Cup playoff in Dublin two years ago. After that match, Hareide had sarcastically said 'Thank you very much for giving us space' to Ireland after Christian Eriksen scored a hat-trick in the 5-1 win.

Earlier this month Hareide said he was “pissed off that we meet them again. I like to play against different nations” but the Danish camp on the eve of the game weren’t providing any quotes to be pinned up on the home dressing room wall as extra motivation.

“Our players respect Ireland,” said Hareide. “Their team looks good. They are well organised. They are hard to beat. I know they have a big heart. Our players say they don't like to play Ireland but that means respect.

“They had a good game against Switzerland at home. The team seems to be the same players used all the time. They are solid.”

extratime.ie asked Hareide would the fact that his team only needed a draw influence his thinking in a match that Ireland need to win.

“We won’t get that tomorrow as Ireland will come forward and look to win the game. We have to operate as we have done in every game. We press the same way, defend in the same way and we haven’t been talking about anything else."

Hareide, who trained as a tax accountant before beginning his professional playing career in his native Norway, is looking for his team to work hard to get them over the line in Dublin on Monday.

“An error can happen in football and that is the fascinating thing in football. You can play well and lose and also play badly and win so we have to concentrate and work as a team.

“The best example is when we played Switzerland at home and they are a really good team and the boys worked very hard and scored late and we got a win. We have to use the 90 minutes plus and do as we have done before.”