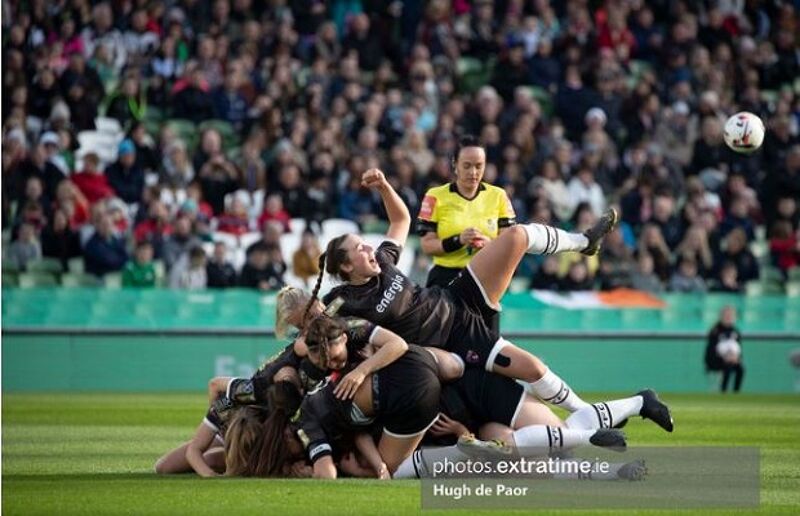 Lauren Kelly’s was at the double as she came back to haunt her former club Peamount United in the WFAI Cup Final at the Aviva Stadium.

Karen Duggan’ first-half strike was arguably the pick of the bunch, but it was in vain as Wexford secured third WFAI Cup.

Two time WFAI Cup winners Wexford came into the game off the back of a comprehensive 7-1 win over local rivals Kilkenny United last time.

From the side that took to the field of play, Tom Elmes opted for four changes, with Rianna Jarrett returning to the side.

However, it was a nightmare start for Peas who fell behind through a Lauren Kelly strike after just three minutes.

Kelly slalomed her way through, before passing the ball into the back of the net leaving Niamh Reid-Burke stranded on her goal-line, as the Slaneysiders took an early lead.

Elmes’ side almost doubled their advantage moments later, but Louise Corrigan was on hand to block Ciara Rossiter’s effort on goal.

Peamount soon however grew into the game, with Aine O’Gorman to the fore of some good play, but the Wexford rear-guard was left untouched early doors.

The 2018 runners-up were soon rewarded for their positive intention of play, and they drew level thanks to a superb strike from Karen Duggan.

Duggan’s effort flew into the top corner, after she capitalised on some hesitant defending from the Wexford defence.

However, just seconds later – Wexford retook the lead through Kelly who notched up her second of the day with an inventive strike inside the penalty area.

Some good play saw the ball reach the path of the forward, who was on hand to lift the ball over the head of Reid-Burke in the Peas goal.

Both teams had opportunities to score as the opening period ended, but they were thwarted by the side-netting in the case of Jarrett for Wexford, while a Peamount header was cleared off the line by a Slaneysiders defender.

With Elmes’ side taking a priceless lead going into the second half, United reacted well to their first-half deficit – with O’Gorman almost nipping to score.

However, Peamount soon wiped out Wexford’s advantage through Eleanor Ryan-Doyle. The forward picked up the ball from 25 yards out, before arrowing the ball into the back of the net.

The forward picked up the ball, before catching Dollard off her line – with the ball finding the back of the net, much to the delight of the Peas crowd.

Despite being in the ascendancy, Peamount fell behind once more thanks to an assured strike from Kylie Murphy.

Murphy was fed in by the physically imposing Jarrett, before slotting the ball away past Reid-Burke, as the Slaneysiders took a pivotal lead heading into the final quarter of the game.

Peamount almost levelled shortly after, but Dollard was on hand to make amends for her earlier error – saving well from a Claire Duggan effort on goal.

From the resulting attack, Jarrett went mightily close, but she was denied at the near post by the Peas shot-stopper as the game opened up.

United continued their search for an equaliser, with Ryan-Doyle’s header going straight at a grateful Dollard.

However, it was Youths who had the last meaningful attack of the game, with Jarrett seeing her curling effort crash off the post.

And it was Wexford who secured their second WFAI Cup on the spin – with Laure Kelly’s double proving decisive in an Aviva Stadium classic.