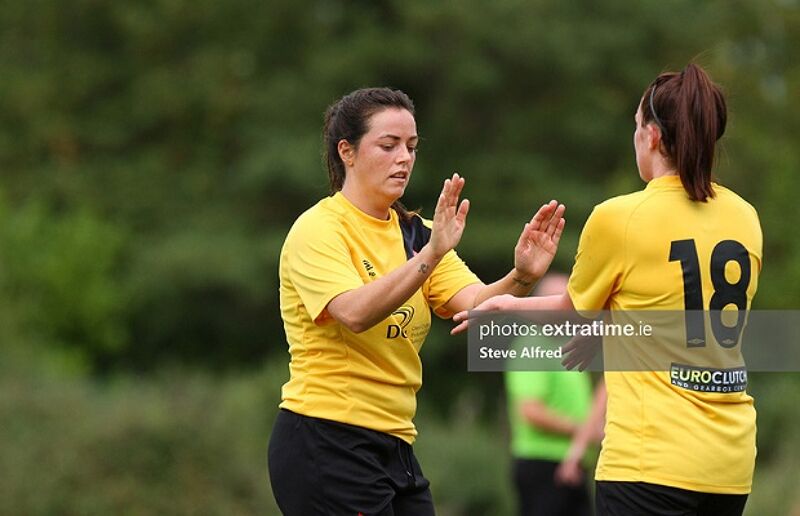 A hat-trick from Noelle Murray and a debut goal for Mia Dodd saw Shelbourne to a comfortable 4-0 win over Cork City at Bishopstown on Sunday afternoon.

Former international Murray scored a penalty in each half before sealing her hat-trick late on while Dodd, a late addition to the starting 11, capped her senior debut with a 20-yard strike.

The game, farcically, had to go ahead without assistant referees as the full complement of officials was unavailable on the day.

The Reds remain just about in contention for an unlikely tilt at the title, trailing Peamount United by eight points with five games remaining (including one in hand).

It was the second time as many weeks Cork and Shelbourne had met one another, Shels having edged a five-goal thriller at Tolka Park to book their spot in the FAI Cup semi-finals.

There was little danger of a repeat in Sunday’s sole National League game as the Reds led as early as the eighth minute as Murray dispatched her first from the spot.

Cork had chances to level through Eabha O’Mahony, who saw her shot blocked, and Christina Dring, who headed a Sophie Liston cross inches wide.

The visitors doubled their lead early in the second half as they were awarded their second penalty, and Murray stepped up once more to beat Maria O’Sullivan from 12 yards.

O’Mahony had a penalty appeal waved away moments later while another appeal for handball went unheeded before Dodd ended the game as a contest on 58 minutes.

Murray completed her hat-trick with two minutes remaining to extend her tally to eight for the season and wrap up a comfortable three points.

League leaders Peamount struck what could be a decisive blow in the battle for the title as they completed a clean sweep of wins over champions Wexford Youths on Saturday night.

Eleanor Ryan Doyle’s eighth goal of the season sealed the win for James O’Callaghan’s side just past the hour mark of a nip-and-tuck game at Greenogue.

Megan Smyth-Lynch had given the Peas the lead from close range after six minutes before Wexford captain Kylie Murphy levelled midway through the half with a thumping header.

The tie was settled midway through the second half by a goal fit to win any game as Ryan Doyle sent a bullet from 30 yards winging past keeper Maeve Williams.

DLR Waves drew level with Cork on 16 points thanks to a hard-fought 2-1 win over Limerick at Jackson Park on Saturday night.

Sophie O’Donoghue put Waves in front earlier on before Mairead Teehan levelled just before half time, however Catherine Cronin forced home a Jetta Berrill cross to seal the three points.