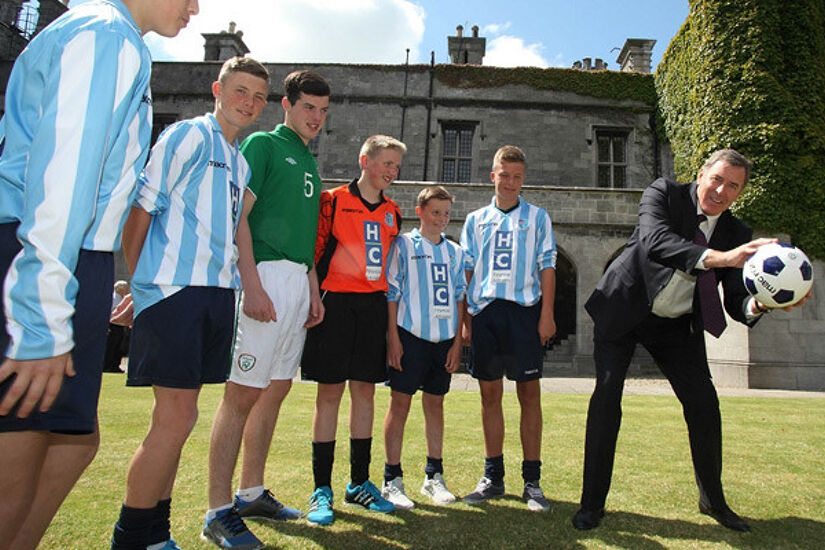 On this day in 1990, David O’Leary converted a famous penalty to see Ireland trough to the quarter-final in their first World Cup finals.

The Arsenal defender sent the travelling fans into raptures as he netted Ireland’s fifth penalty from five after Packie Bonner had saved from Daniel Timofte.

The Irish had progressed into the knockout stages from Group F without winning a game. Three draws were enough to progress from the group as Ireland held England, Egypt, and Holland.

Ireland were to play Romania in the last 16 of the World Cup on the 25th of June, 1990 at the Stadio Luigi Farraris.

While Ireland avoided the toughest test in the form of West Germany, Romania, who had the legendary Gheorghe Hagi on their side, would still prove to be a daunting challenge.

During normal playing time the Irish could not make the breakthrough and nor could Romania, who came closest to breaking the deadlock through the threat of Hagi.

The game ended in a 0-0 draw after 90 minutes and a further half hour of football was on the horizon in extra time.

After another gruelling 30 minutes, neither side could find the winning goal and the Irish players were to step up to the plate in their first ever penalty shoot-out at a major football championship.

It was revealed after the game that the Irish were not prepared for the eventuality of a penalty shootout and it had not been set in stone who would take the penalties should the event occur.

Hagi took the first penalty for Romina and dispatched it despite Bonner diving the right way and almost getting his hand to the ball.

Kevin Sheedy stepped up first to take the first irish penalty, and the forward smashed it down the middle of the goal as Romanian keeper Silviu Lung dived to his left.

That said, Ireland were lucky with the fourth penalty from Cascarino as he slightly scuffed his shot along the ground almost straight at the keeper, who should have save.

The last penalty for Romania was taken by Timofte of Dynamo Bucharest, who had only come on as an extra time substitute.

Timofte took a short run up and drove the ball to Bonner's right, who dove the right way pulling off a vital and historic save, much to the delight of the Irish supporters and Bonner himself, who leaped into the air to celebrate.

The shoot-out effectively entered sudden death before Timofte missed his spot kick. Up stepped O’Leary to take the next kick, the aging centre-half was an unlikely choice to take a vital penalty.

Leary hadn't featured in any of the earlier group matches at Italia ‘90 and had only come on as an extra-time substitute for Steve Staunton.

The hopes of a nation rested on this one penalty. The hopes and dreams of Jack Charlton, O’Leary’s team mates, and every Irish football fan watching the game live rested on his shoulders.

It felt like an eternity before O'Leary placed the ball on the penalty spot, adding to the unbearable tension of a nation watching at home.

It was the be George Hamilton who summed up the moment perfectly as the whistle blew: ‘a nation holds its breath.'

O'Leary took his run up, the anticipation too much for some including Charlton who did not watch the penalty.

He struck the ball to the left of the goal as the goalkeeper went to his right. ‘YES, WE’RE THERE!!!’ exclaimed Hamitlon as the ball bulging in the back of the Romanian net.

This led to scenes of jubilation and celebration amongst the Irish squad, the Irish fans in the Stadio Luigi Ferraris, and all Irish sports fans across the world.

David O'Leary’s decisive penalty sending Ireland on their way to Rome for a quarterfinal showdown with World Cup hosts Italy, which would have its own historic moment.