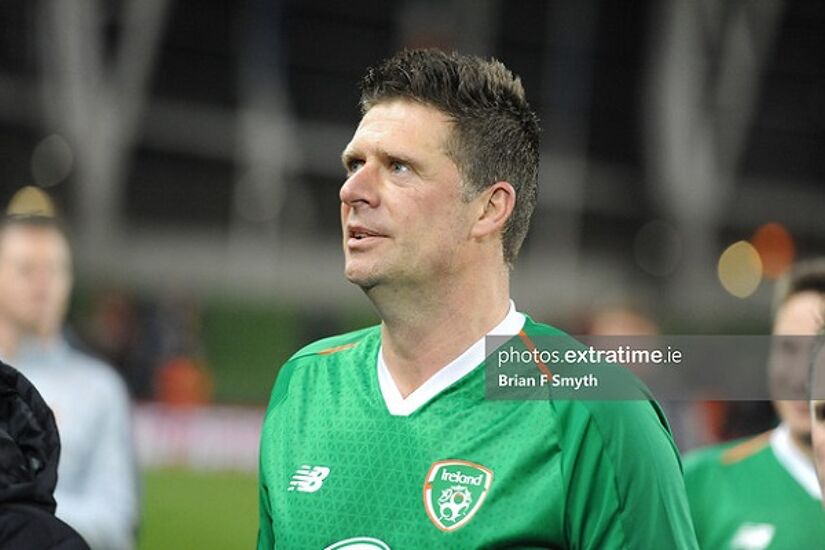 Red Strike is the marketing company that underwrote the ‘Visionary Group’ blueprint for the future of Irish football presented at the Mansion House on Friday afternoon.

There were more red flags than anything resembling a ‘strike’ in the review the Niall Quinn-backed group hope will give them a foot in the door of the game here.

Quite how Quinn and Co’s plan came to dominate a stakeholder’s forum called by Minister for Tourism, Transport and Sport Shane Ross in government buildings is unclear.

The Mansion House was the scene of the ratification of the Declaration of Irish Independence in 1919, as well as the signing of the Anglo-Irish Treaty in 1922.

Those expecting a similarly revolutionary set of ideals for Irish football from the self-styled ‘Visionary Group’ must have come away from the experience disappointed.

The 31-page review is a handy consolidation of mostly mutually-agreed-upon grievances with Irish football along with a handful of vague suggestions for future action.

But as far as visionaries go, a former resident of the house, Daniel O’Connell, may not have to worry about his status as the greatest revolutionary thinker to grace its halls.

The red flags began long before the report was published – Quinn used his extensive media profile as a broadcaster to speak about his concern for the state of Irish football.

The appearance in a Sunday newspaper of a leaked draft of the report was another, its trumpeting of some more vague promises a further tease of what was to come.

And while the journalist in question is a fine writer, it’s telling that the Visionary Group sought out a journalist based in the UK who has little dealing with domestic football.

If there are essentially two types of football person on this island, those who support and contribute to grassroots football and those whose only interest is the national team, the choice of journalist and paper targeted the latter.

Quinn, taking part on Tuesday in a fortuitously-scheduled media event ahead of the Champions League final, said he wouldn’t give any details on the plan ahead of its unveiling on Friday.

The following day, more details of the Visionary Group’s review were leaked in a report in the Daily Star.

Now, PR is an important part of any business, and football is a business, but it’s usually the case that the idea precedes the spin and not vice versa.

And if Quinn, or anybody else, is to step into the vacuum created by the recent upheaval in Irish football, they'll need more than soft media coverage to gain legitimacy.

Quinn and the review’s author, the former Galway United and Shamrock Rovers player Kieran Foley, were present at the stakeholders’ event at the Mansion House.

The event brought together a motley crew of figures involved in Irish sport, from government ministers to FAI board members, club administrators and coaches.

Others, like UCD economist Colm McCarthy, an advisor to Charles Haughey and architect of Fianna Fáil’s infamous ‘Bord Snip Nua’ that delivered harsh austerity measures on the most vulnerable in Irish society, made less sense.

He led the batshit plan to buy Scottish Second Division side Clydebank, rob their supporters of a local team, and play out of Dublin in the late 1990s.

McCarthy was invited to speak as a responsible voice in the corporate governance of football in Ireland.

The panels themselves, as reported by journalists present at the event (extratime.ie was not invited), were a mixed back of general grievances and earnest calls for change.

The structure of the panels, however, on topics like ‘The Future of Irish Football’ and ‘Corporate Governance in the FAI,’ seemed less like opportunities for real discussion as attempts to frame the discussion before it’s started.

Having understandably dominated the media interest around the event, the Visionary Group, as promised, uploaded their review (viewable here) at its conclusion.

To call it incomplete would be the most charitable assessment – indeed, the group flagged in advance that it was only a preliminary review and would be expanded on if they were granted the keys to initiate reform.

Based on what has been presented, a badly-written document filled with jargon, spelling and grammar errors and nonsense graphics, we shouldn’t hold our collective breath.

The second paragraph is a single, unwieldy, 124-word sentence that doesn’t seem to have a beginning or an end but lists nine of the association’s marginal representative teams, none of which are mentioned again. It doesn’t get much better.

If this group wished to place a full stop at the end of a dysfunctional era in the history of Irish footballing governance, they certainly didn’t tell their copywriters.

In fact, it’s clear they didn’t have anybody competent look over the documents as it’s nothing a decent copywriter couldn’t have proofed on their lunchbreak for a hundred euro.

Whether they felt getting an outside eye to look over their work was beneath them, or they felt it was good enough to stand on its own merits, neither possibility is encouraging.

The review itself is predictably bland and uncontroversial – the deficiencies in Irish football have been clear to anybody with even a casual interest for some time and this isn’t the first time they’ve been detailed.

Indeed, the importance of the review might not be in its demonstrably unimpressive content but the fact such a document has been presented, in public, with much fanfare and interest across the football community – a depressing vista in itself.

The review certainly ticks a lot of boxes – a point Foley makes unceremoniously by loading the text with dozens of tick marks – but practical suggestions for how to address the various problems are in short order.

Numerous references are made to the inability of the FAI board to be ‘dynamic’ and to act quickly as a recurring problem, yet slow speed of decision-making within the association hasn’t been a problem in recent years.

The problem identified by almost everybody within Irish football in recent years has been, in stark contrast to the grievance set out in the report, the fact the CEO has been able to act above the purview of the board and make decisions without a clear oversight process.

The group’s proposed ‘new’ structure for the board of the FAI suggests a “mandatory minimum of one female Board member” and a “dedicated Board member with responsibility for women’s game.”

Yet the current FAI board covers both of those objectives in Niamh O’Donoghue, who was present at the event, and what’s abundantly clear is that she needs more people like her to adequately represent 50% of our population.

Women in Ireland have always suffered as the poor cousin to the men’s game and, on the eve of the World Cup in France, it would have been nice to see the Visionary Group show a bit more, well, vision.

Interestingly, of the roughly 150 people seated at the 21 tables, just eight were women, which is actually far less representative than the FAI board that the Minister for Sport wants to see replaced.

Elsewhere, the report chippily notes that “while the English Premier League have their domestic media deals, we in Ireland have a partnership with Europe and are home to some of the largest multinationals and corporations the planet has ever seen."

While not explained in any detail, this relates to the group’s intention to privatise the League of Ireland (a cause shared by some Premier Division clubs) and tap into Foreign Direct Investment.

It would have been interesting to see this point expanded on as it’s arguably the only revolutionary idea contained in the entire review, and presented the way it is it seems to have little relevance to football.

Private investment, though not explicitly stated, is a key part of the group’s plans and the kite for creating private academies for male footballers has been flown in the past.

How this might jar with clubs like Shamrock Rovers, Cork City and Bohemians who, in the absence of central guidance from the association, have created their own pathways to elite football is unclear.

Lamentably, the few concrete ideas contained within the review to advance Irish football can be filed alongside Jonathan Gabay’s infamous ‘scorelines on bus stops’ idea.

The development of an app for volunteers to organise, or to route fans to their nearest League of Ireland ground, would be welcome but are hardly the silver bullet that will turn around a sport in crisis.

None of this should downplay the capability of the people involved in this Visionary Group’s presentation for Irish football.

Foley, in his time at Digicel, helped restructure the CONCACAF Gold Cup and turn cricket’s Carribean Premier League into a viable and profitable enterprise.

Quinn, as chairman of Sunderland, helped turn an ailing club into a regular competitor in the English Premier League.