Jason McAteer feels his old international boss Mick McCarthy is exactly what Ireland need as the Euro 2020 qualifying campaign kicks off next month.

McAteer was full of praise for McCarthy’s man management skills as he helped launch the Liverpool Legends v Republic of Ireland fundraiser in aid of the Sean Cox Rehabilitation Trust.

“I honestly think Mick is exactly what Ireland need right now,” the Liverpool and Ireland legend said at the launch at the Aviva Stadium in Dublin.

“Football’s moved on but it’s not like he’s been in the wilderness for the last 20 years since he was last manager here.

“He’s managed various football teams and done really well. His last job at Ipswich, with the budget he had, was phenomenal. You can see how difficult Paul Lambert is finding the job.

“What Mick did there was brilliant. I’ve said it before and I’ll say it again now, being an international manager hasn’t changed.

“Whether you like the manager or not is something that plays a part. I, for one, played under two managers here who had unbelievable man-management skills, and they were Jack and Mick.

“I wanted to come and play in every game. Even when I was injured I wanted to come away with the squad and be around the team, and that’s just testament to the way they managed and what they brought out.

“You’re dealing with the best players that country can offer. A lot of the time they don’t need coaching – they just need managing.

“It’s the right time for him to come, to get a different voice in the dressing room, a different expectancy to what the previous regime had.

“I think one or two issues, like how to attract other players to come and play for Ireland. I think Mick is the man to do that.

“Obviously he’s got a two-year job, hasn’t he, before he hands it over to Stephen Kenny. The difficulty is if Stephen doesn’t do well, and Mick does unbelievably well, what are they going to do?

“But then again, that’s a great problem to have.” 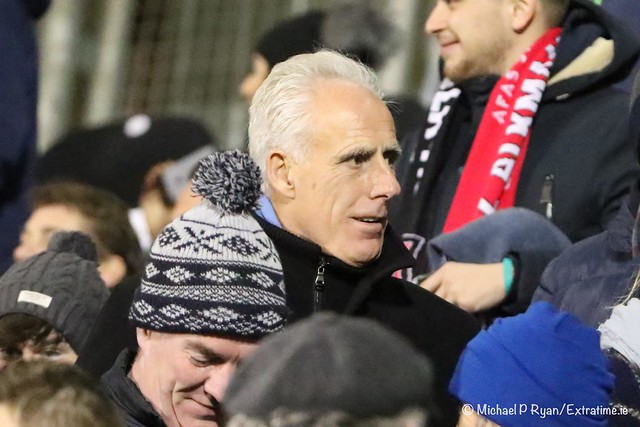 With the timing of the appointment being less than ideal, McCarthy’s first game in charge will be next month’s qualifier double header against Gibraltar and Georgia.

He won’t have the luxury of a friendly or two to experiment and try out his ideas but McAteer feels that, with his experience, McCarthy will be more than capable of dealing with it.

“There’s no tinkering and having a look – you’ve got to go with what you’ve got. He’s also got the balance though.

“He did a fantastic job transitioning the first time around after Jack. He had an aging squad and had to bring some fresh faces through – Gary Breen, Damien Duff, and Robbie Keane.

“He brought them through and he bedded them in really well. We got the success out of it by going to Japan in 2002.

“A good team spirit is something that will return and be there in abundance under Mick’s watch. I always felt like we had unbelievable team spirit in that dressing room, playing for Ireland that got us through plenty of games and got us plenty of results.

“I think Mick will bring that back to the squad. They’ll run that extra couple of miles for Mick and put their bodies on the line for Mick.

“That’s the kind of manager he is, and he demands that, but you want to do it for him.”

McAteer was in Dublin with fellow Liverpool legend Ian Rush to launch a fundraiser that will take place at the Aviva Stadium on April 12th with all proceeds going to the Sean Cox Rehabilitation Fund.

They both spoke about the importance of the fundraiser and how they were both honoured and delighted to be involved for such a good and important cause.

“I came over as a club ambassador for the Napoli game where we met up with Martina and the family and got a behind-the-scenes take on exactly what had happened, but also the impact it had on the family and how difficult it was for them.

“It's a relatively young family and what they have got to go through is just an absolute nightmare.

“When the opportunity to put the game on came along, it was going to be nothing else but a yes from me. Of course I'm going to turn up and play.

“It's something that they should never have had to be involved in. No-one should go to a football match and sadly end up in this situation.

“Like Martina says, it is what it is and you've got to deal with that. You can sit around and wait for other people to do things, or you can be proactive and do it yourself. That's what the football club has done.

“Behind the scenes, the team that have helped put it on, the club and the FAI have all done a phenomenal job, because I know first-hand just how difficult it is putting a charity event on.

“As ex-players, our job is relatively easy -- we just turn up and play. But it's all about raising as much money as we can for Sean's rehabilitation and that means creating as much awareness as we can for the game.

“Hopefully we can fill the stadium and raise as much money as we can.

For more information on Sean’s story or to donate to the campaign visit supportsean.com

Price pleased with progress over season for Rovers II