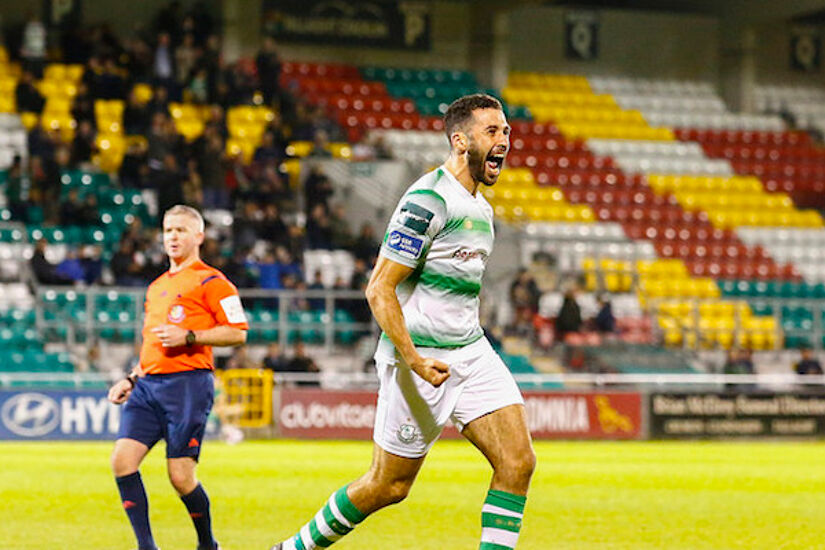 Shamrock Rovers had a routine win on Friday night as they put five unanswered goals by league strugglers Limerick at Tallaght Stadium on Friday night.

The Hoops came out of the traps quickly and got the opening goal inside ninety seconds. A Dylan Watts corner from the right was only half cleared by the Limerick defence. It landed to the feet of Rovers captain Ronan Finn who punished the poor clearance by volleying the ball into the bottom corner.

Tommy Barrett’s men were struggling with the constant pressure that Stephen Bradley’s side were putting them under and they fell two behind just ten minutes later. Another Watts corner came in driven low to the edge of the box and it was latched onto by Greg Bolger.

He smashed it into the roof of the net with sheer power giving Jack Brady once again no hope of saving it as the pure speed of the ball took it past the Limerick ‘keeper.

Two minutes later and the game was dead and buried compounding the misery to Tommy Barrett’s side’s night. A long range Watts strike was deflected off a Limerick defender which had Brady back peddling but it was too little too late as it looped over his head and into the back of the net.

By this point Rovers were making chances at will and former Fulham man Sean Kavanagh had a fantastic free kick tipped over the bar by Brady who was rather busy throughout the first half trying to keep Limerick in the game at every possible moment.

A minute from the interval and Rovers made it four. Brandon Kavanagh took over corner duties from Watts. The young Kavanagh floated a fantastic ball to the front post finding the run of Robert Lopes who looped his header over the goalkeeper finding the top corner in the process.

The Hoops didn’t let up the pressure in the second half and almost made it five in the first couple of minutes. Brandon Kavanagh’s corner was put into the six yard box to attack. Brady came to claim the ball but spilt it giving Ronan Finn an opportunity to hit it towards goal and the Rovers captain was unfortunate not to grab a second as his effort hit the post.

Only a few minutes later and Finn did have his second goal of the game. A lovely cross to the back post by Watts found the head of Aaron Greene who forced a decent save out of Brady. However the goalkeeper could only push it out to the penalty spot with Finn reacting the quickest to smash home taking a deflection on the way in.

Brandon Kavanagh and Lopes linked up once again from a set-piece three minutes later. This time Brandon Kavanagh put his corner on the edge of the six yard box and Lopes made another darting run attacking the ball fantastically and was unlucky not to score just directing his header past the post.

Bradley brought on 18-year-old Dean Williams for his league debut late in the game and he almost got on the act to make it number six just a minute from time. Another brilliant Brandon Kavanagh pass found the feet of Williams who turned superbly well with his shot well saved by Brady who tipped it onto the post denying the young strike a dream debut goal.