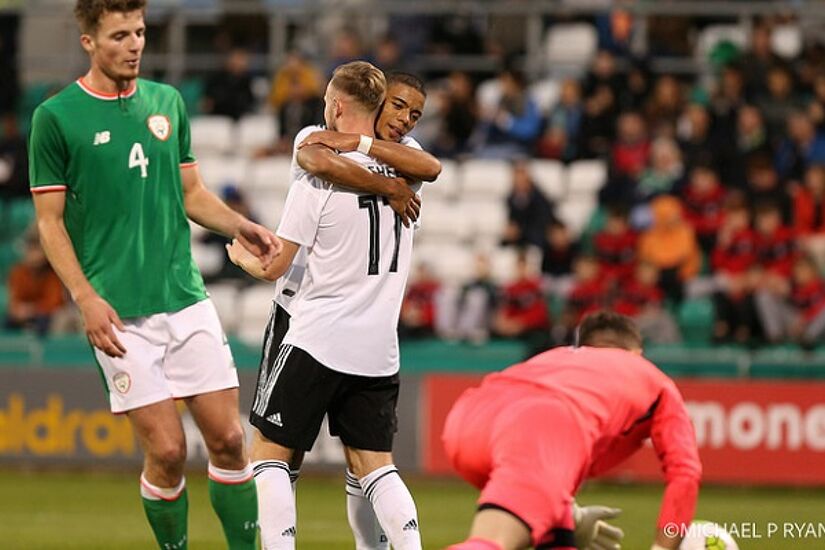 A controlled performance from Stefan Kuntz's Germany under-21s on Tuesday night gave them an emphatic 6-0 victory and firm control at the top of qualifying Group 5.

It was the Germans who dominated the opening minutes of the game and took the lead on five minutes.

Benjamin Henricks picked up the ball just outside the Irish box before slipping a pass through Jake Mulraney’s legs. Seydel latched onto the dangerous pass and slotted past Kieran O’Hara.

Stefan Kuntz's side cranked up the pressure after the opening goal and almost made it two shortly afterward.

A Maximilan Eggstein free-kick could only be palmed into the path of goal scorer Sydel, who had the goal at his mercy but decided to sidefoot the ball past the post, letting the Irish defence off the hook.

Things went from bad to worse for Ireland after 20 minutes as winger Jake Mulraney rashly brought down Lukas Klostermann in the box, giving referee Alejandro Hernandez no choice but to point to the spot.

Teuchert took responsibility from 12 yards and he made no mistake, sending O’Hara the wrong way to double the lead.

King’s side responded well after going two behind. Ryan Manning's rasping shot hit the side netting after the ball fell to his feet on the edge of the box from a Josh Cullen corner.

Germany almost put the game to bed a few minutes into the second half. Leipzig full-back Lukas Klostermann went down the right hand side with ease and found himself in acres of space.

Klostermann looked up and saw the late run of Teuchert, whose shot was poor from the edge of the box and gave O’Hara no problems.

Ireland struggled to create any sort of attacking play throughout the game with an ambitious effort from former QPR striker Reece Grego-Cox not causing any trouble to Alexander Nubel.

Five minutes later the game was put to bed. A poor clearance from O’Hara only managed to find Florian Neuhaus. He picked out the run of Teuchert, who rifled home his second at the near post.

Once again, Teuchert stepped up from 12 yards and went the opposite side this time, again making no mistake as O’Hara went the wrong way and Teuchert completed his hat-trick.

Germany got a third penalty eight minutes from time as a pass down the right-hand channel caught out Mulraney in a foot race with Klostermann.

Just like the penalty incident in the first half, Mulraney brought down the full-back rashly giving Alejandro Hernandez once again no choice but to point to the spot.

Substitute Serdar stepped up this time and placed his penalty into the top corner with his right foot.

The Germans didn't let up and they made it six with five minutes to go. A scramble in the Irish penalty area occurred as the defence failed to clear their line.

Serdar grabbed his second of the game as he back-heeled over the line from close range, completing the demolition of Noel King’s side.

Germany now lead the group by five points from Ireland with two games each remaining.