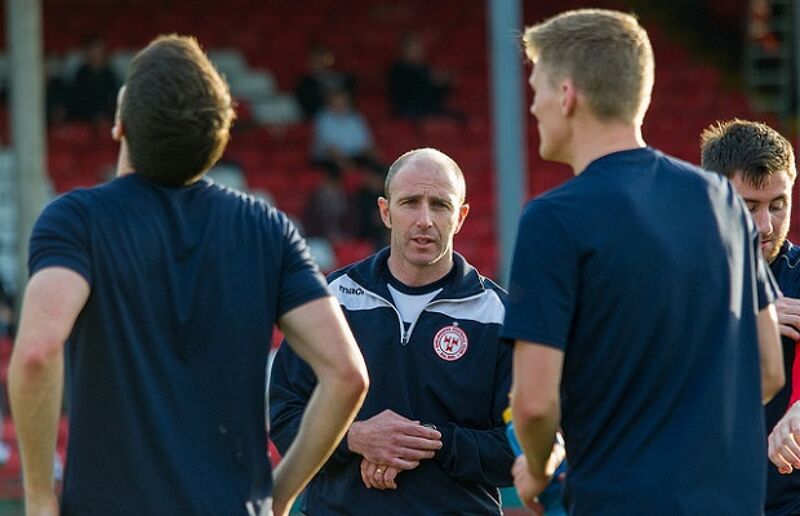 After 120 minutes of play at a cold and wet Oriel Park, Shelbourne recorded a two goal victory over 2015 LSC champions Dundalk. Strikes from Adam Evans (x2), Dayle Rooney and a James English penalty saw the Leinster Senior Cup return to Tolka Park for the first time since 2010.

In truth, the game took a long time to settle down with both teams feeling their way into it. For the home side, it was an opportunity for six of the Enda Mc Guill winning side to impress Stephen Kenny and for Shelbourne the chance to get their hands on some silverware.

Chances in the first half were few and far between, both sides passing the ball well on the greasy surface but failing to trouble their opposition goalkeepers, except for a speculative effort from Dayle Rooney which Gabriel Sava pushed onto the post with twenty minutes gone. It took another twenty minutes before the deadlock was broken. Conor Clifford’s exceptional free kick from thirty yards arrowed into Delany’s top corner to open the scoring.

The second half saw Shelbourne much more threatening as Sava had to save bravely at the feet of Evans before even two minutes of the second half had elapsed. The decisive moment of the game arrived five minutes later as James English entered the action. The frontman caused menace throughout his time on the pitch ending up with a goal and the Man of the Match award.

Shelbourne’s equaliser arrived courtesy of Dayle Rooney’s left boot. His free kick, from a similar position to Clifford’s earlier strike, curled into the top corner of the net on fifty five minutes. The away side continued to press and it took a fantastic sliding tackle from Gavin Smith to prevent the Tolka Park side from taking the lead with ten minutes left in the game. However, he was powerless to prevent Owen Heary’s men nudging their noses in front as Rooney’s right wing cross was headed back across the goal by English before Evans nodded to the net from close range.

Time looked to be running out for the Lilywhites but in the final minute Cian Flynn’s cross wasn’t cleared and Dean Watters poked the ball into the net.  Indeed, the home side almost snatched a winner but Carlton Ubaezuono dragged his effort wide of the far post after a great run down the wing.

In extra time, once more, it was Shelbourne with the initiative, Sava saving well from English after two minutes. However, much like before, the men from Dublin took the lead shortly after. This time Evans found the net from 12 yards after being set up well by English and, on the stroke of half time in extra time, they increased their lead as English got the goal his performance deserved by netting a penalty after Rooney had been fouled.

The second period of extra time saw Shelbourne once more threaten early doors as Sava had to make a smart save from James O’Brien before Niall Lanigan, who had only been on the pitch a matter of moments, was sent off for a late tackle on Dean Watters. However, it did little to take the gloss off a fine Shelbourne performance where the experience of Alan Byrne, Aidan Collins and skipper Delany, mixed with the creativity of Evans, Rooney and English were enough to see Shels capture the Leinster Senior Cup for the first time since 2010.