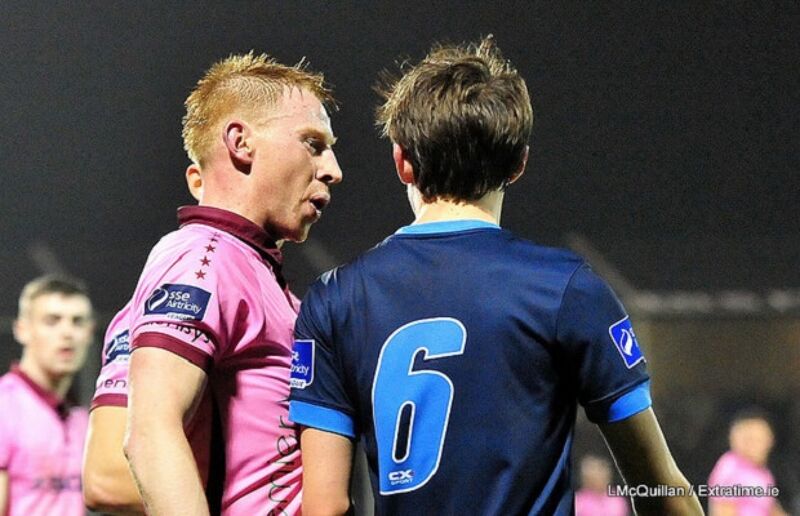 Wexford Youths have taken a big step to securing their Premier Division status after a 2-0 first-leg win in the promotion/relegation play off against Drogheda United.

Danny Furlong and Lee Chin struck second-half goals to give Shane Keegan’s side the advantage ahead of Friday’s second leg in Drogheda.

The first chance arrived after just 10 minutes with the in-form Gareth McCaffrey denied by a good block from Chris Kenny.

Minutes later Marc Griffin curled across the face of the Youths goal, before Pete Mahon's side hit the woodwork. Richie Purdy made space in the middle of the park outside the Youths area and fired left footed towards goal but his effort came back off the bottom of Graham Doyle left-hand post.

Drogheda United struck the crossbar as they looked to grab an early goal. Griffin whipped in a corner from the left but Luke Gallagher saw his powerful header come back of Doyle's crossbar.

The Youths had their first real chance as the half approached the half-way mark. Craig McCabe’s long throw from the found the head of Aidan Keenan and his effort needed the hand of Drogheda United keeper Stephen McGuinness to keep it out, before the keeper did well to hold Lee Chin’s header minutes later.

Youths striker Furlong had a good chance for the home side as half time approached. Keenan played the through ball to Furlong, but, after cutting inside, he couldn’t beat the excellent diving block of Stephen Dunne.

Both sides continued to create chances. The visitors forced Doyle into a good low save from Griffin after a great through ball from McCaffrey, before Keenan fired wide from a great position after a superb right-wing Paul Murphy cross.

The second half saw the Youths starting with much more possession as Furlong fired across goal, before Bonner forced McGuinness into a good save from his curling effort.

The deadlock was finally broken midway through the second half and it was the home side that got the opener. Murphy played the through ball for Furlong after a one-two and he fired a volley past McGuinness to give the Youths the lead.

And the home side almost doubled their lead when Aidan Friel forced McGuinness into a good save before Furlong’s rebound was brilliantly cleared off the line by the retreating Dunne. At the other end, Doyle had to be alert to save from the lively Jake Hyland.

At the full-time whistle approached, the home side did grab a vital second goal in the first minute of stoppage time. Craig McCabe’s throw found Keenan on the left. He crossed and Lee Chin got to the dropping ball after Drogheda United failed to clear and he volleyed past McGuinness to give the Youths a 2-0 lead ahead of the second leg on Friday.