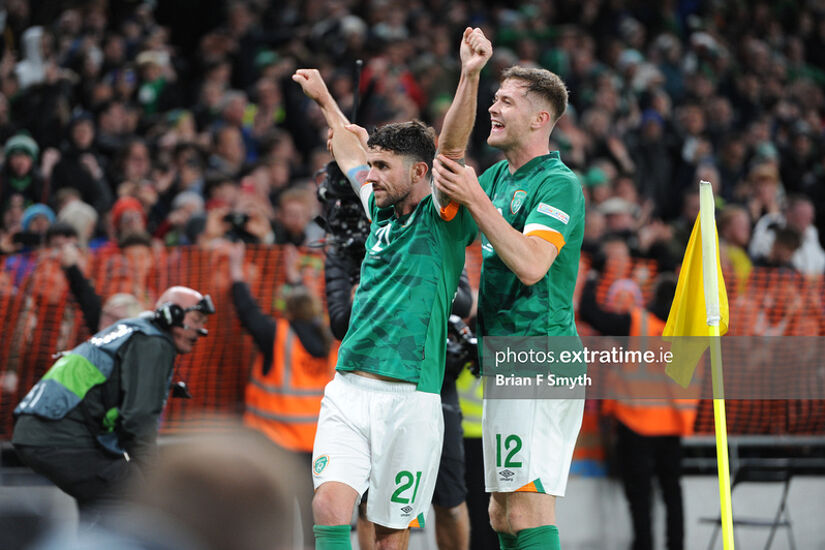 Republic of Ireland secured third place in the UEFA Nations League B, but only just as they saw a two-goal lead slip away before remarkably beating Armenia 3-2 in a match that teetered on the verge of disaster on a chaotic night at the Aviva Stadium.

A stoppage time Robbie Brady penalty spared the blushes of Stephen Kenny on a night where spot kicks played a crucial role in results for both the Ireland U21s in Tel Aviv and for the senior side in Dublin.

It is a win against a lesser side at home but Ireland showed the same mental fragilities that saw leads against Portugal, Serbia, Scotland and Ukraine. However, when it mattered most it was an old head on old shoulders as Brady calmly slotted the penalty away after some chaotic scenes.

Referee Rade Obrenovic was at the centre of attention and it was our old friend Mr Jug who gave him the nod from VAR to award Ireland a game winning penalty which Brady scored on his first start since March 2021.

Armenia finished the game with nine-men after they had two players dismissed following the VAR review to add to the kamikaze scenes.

John Egan and Michael Obafemi appeared to have secured the crucial three points and ensured Ireland coasted to just their second win of the campaign, but this is Armenia and we don’t like them.

The mentality of Kenny’s Kids has been called into question after the second half in Hampden got away from them but they still emerged with some credibility. All would have been lost if disaster followed tonight.

Long range strikes from Artak Dashyan and Haroyanband Spertsyan almost made the impossible a reality and it was again the same old failings against lesser sides – Ireland backing off and allowing long shots on goal.

In the end, a win is a win but even the dramatic scenes will do little to uncover anything new about this Ireland team. Great resolve to come back in the end but we learned nothing new ahead of next month’s EURO 2024 Qualifying draw.

Ireland’s win come in threes. Three goals against Luxembourg, Azerbaijan, Scotland and Armenia but it should not have been as dramatic.

Stephen Kenny’s charges dominated the opening period but had little to show for it other than a John Egan header after seventeen minutes in what was a laboured first 45.

The excellent Obafemi had gone close earlier but he glanced a Jason Knight cross wide as he appeared to be unaware of his surroundings.

The exiled Swansea City striker soon got his goal and what a goal it was. It was another threaded ball from defence through the middle and Obafemi turned, swivelled and rifled a low bullet into the bottom corner of the net.

Surely any fears of relegation if there were any were eased right? Not quite.

Relegation to League C became a serious possibility when two quick fire goals from Artak Dashyan and Haroyanband Spertsyan stunned the Aviva into silence and left the Boys in Green on the brink of collapse with less than 20 minutes to play.

Khoren Bayramyan fired just wide of the post and the home crowd burst into a fit of jeers as frustration ebbed around Landsdowne Road.

Jayson Molumby was excellent in the 54 minutes that he played but he was fortunate to escape a second yellow and was quickly withdrawn by Kenny and Ireland lost control of the midfield as substitutes failed to make the desired impact once again.

Then chaos. A Dara O’Shea effort was blocked by Dashyan and after a lengthy VAR review referee Rade Obrenovič he adjudged the Armenian goalscorer to have handled the ball inside the area.

Queue more chaos as Hovhannes Hambartsumyan was also given his marching orders as the game spiralled out of control.

It was fitting that Brady after such struggles with injury would be the man to score the winning penalty and send the Aviva into raptures, scenes which could not have been imagined at 2-0.

Birmingham City striker Scott Hogan was introduced late on and he should have put some gloss on proceedings with a fourth goal but he curled wide when he should have scored.