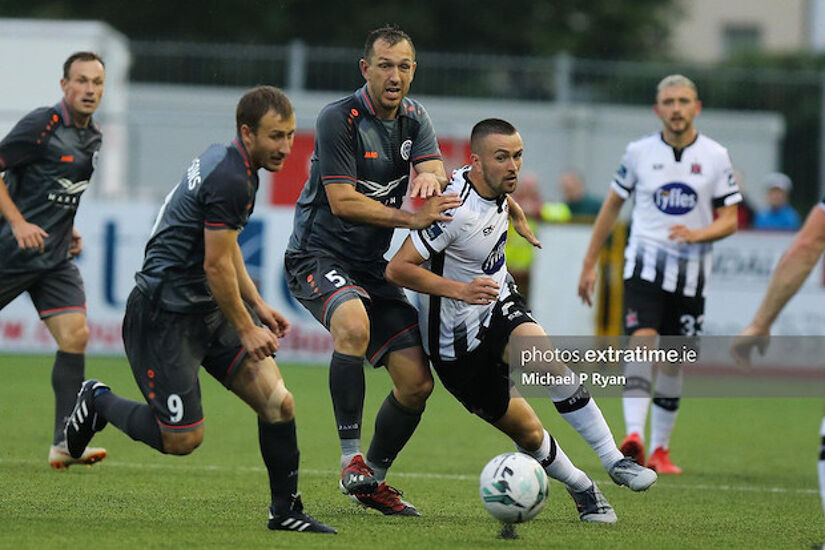 Michael Duffy then of Dundalk in action against Riga's Armands Petersons in their European clash at Oriel Park in 2019 Credit: Michael P Ryan (ETPhotos)

Derry City play Riga FC in the first qualifying round of the Europa Conference League at the Ryan McBride Brandywell Stadium this Thursday (kick off 19:45).

So who are Riga FC?

Riga FC is a Latvian club which plays in Virsliga. The club is only seven years in existence, having been formed through the merger of Dinamo Riga and FC Caramba.

They are managed by a 38-year-old Croatian Sandro Petrovic who was only appointed at the start of June. It is Petrovic’s first stint as a manager of a professional club having previously been assistant manager at Dinamo Zagreb.

He took over from former player Kristaps Blanks who held the position of interim manager up to the start of last month.

Approximately half of the Riga FC squad are native Latvians, but in common with most teams in Eastern Europe they also have a very multinational squad with players from Brazil, Ghana, Sweden, Ukraine, Austria, Senegal and Montenegro.

Who to watch out for?

His previous clubs include Shakhtar Donetsk and Bayer Leverkusen where the former German goal scoring machine and later club Sporting Director Rudi Voller signed him back in 2014.

He has made nine appearances for Riga since joining them scoring one goal.

At 28 years of age, he is one of the driving forces in Riga’s midfield and while he has not been capped by Ukraine at full senior level, he has represented his country on 63 occasions at all age groups from U-16 to U-21, with a very impressive tally of 23 goals.

What European pedigree do Riga FC have?

Riga FC has a lot of experience of performing on the European stage, having played 21 games since their formation in 2015. They have participated in the qualifiers for the UEFA Champions League, the UEFA Europa League and the UEFA Europa Conference League.

In 2019, they were eliminated in the first qualifying round of the Champions League by Dundalk 5-4 on aggregate after both legs finished scoreless. The went on to the play-off round of the Europa League that year where they were beaten by Copenhagen 3-2 on aggregate.

They were eliminated by Celtic 1-0 in their covid hit one legged Europa League third qualifying round tie in 2020.

Lat year they were beaten 2-1 on aggregate by Malmo of Sweden in the Champions League first qualifying round, after which they went into the second qualifying round of the Europa Conference League.

They had a comfortable 3-0 aggregate win over Macedonian side Shkendija before then beating Hibernians of Malta (Shamrock Rovers’ opponents in the Champions League this season) on a 4-2 aggregate score in the third qualifying round – with the second leg a controversial affair officiated by Irish referee Rob Hennessy.

They finally bowed out of the competition at the play off stage when losing 4-2 on aggregate to Lincoln Red Imps of Gibraltar.

How did they fare last season?

They last won the Latvian Cup in 2018 but in the 2021 competition they were beaten in the semi-final 2-1 by the eventual winners RFS.

What has been their route to Europe?

The club qualified for the Conference League by virtue of finishing fourth in the ten-team Virsliga in 2021, and they ended that 28-game campaign on 50 points, 16 points behind league winners RFS.

What are Riga FC’s recent results?

The Virsliga is at the three-quarter way stage and Riga FC are currently in third position on 41 points, ten points off the league leaders Valmieras.

Their form coming into the European game is good having won three and drawn two of their last six games, with the sole defeat being a 2-0 home loss to the league leaders Valmerias.

Their last game on Friday before they head to Derry was a scoreless draw away to fourth placed team Liepaja.

The club’s home ground is Skonto Stadium which has a capacity of 8,087 spectators and their average home attendance is approx. 500.

The ground is also home to the Latvian national team.

It will not be Derry City manager Ruaidhri Higgins’s first visit to the Skonto Stadium, as he was a member of the Stephen Kenny managed City side which drew 1-1 with another Latvian side, Skonto Riga (they were later dissolved in 2016 due to bankruptcy) in the Europa League in 2009.

Their away goal on that occasion was scored by Scot Tam McManus and one of their unused subs was Irish International James McLean.

When will the second leg of the tie be played?

The second leg will be played at the Skonto Stadium on Thursday 14th July with an 18:00 kick off.