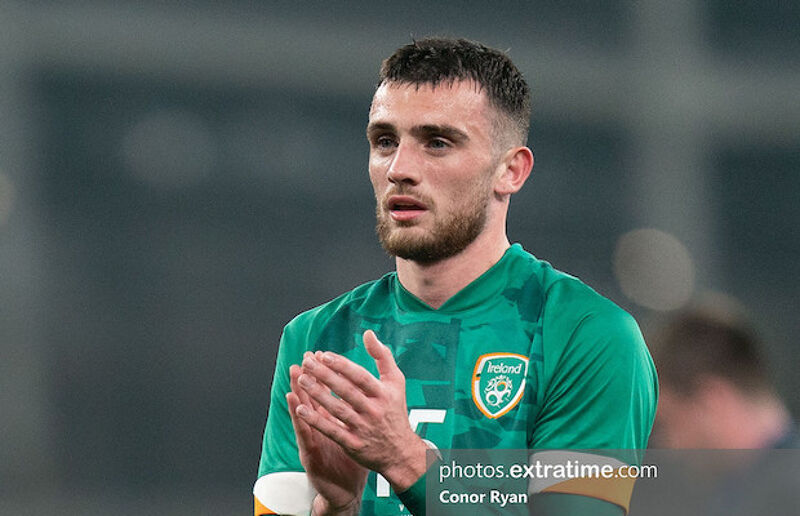 It was lucky 13 for the Republic of Ireland as they picked up their maiden win in the UEFA Nations League at the 13th time of asking after they swatted Scotland aside by three goals to nil at the Aviva Stadium.

First half strikes from Alan Browne and Troy Parrott put Ireland two up at the interval before a wonderstrike from Michael Obafemi just after the break ensured the points for Ireland as they moved level with their opponents in the Group 1 of League B.

The pressure was on Stephen Kenny after back-to-back defeats against Armenia and Ukraine left Ireland at the foot of the group. He made five changes with Obafemi making his first start while the excellent Jayson Molumby was drafted in alongside Parrott, James McClean and Browne.

There was also a tweak from the usual 3-4-3 formation with Obafemi partnering Parrott up front as Knight dropped deep into a midfield three as Ireland lined out in a 3-5-2.

A common theme in Kenny’s reign has been bright opening 20 minute periods without scoring only to fizzle out and surrender control of games with many wondering how Ireland would play if they did manage to make their pressure count.

We got our answer in the 20th minute when Alan Browne bundled in the opening goal from point blank range after Shane Duffy directed McClean’s corner back across goal.

Roared on by a delirious crowd, the Boys in Green doubled their lead in sumptuous style as the front two combined to send the Aviva Stadium into raptures.

Parrott nodded on Caoimhín Kelleher’s goal kick and continued his run into the box. Obafemi played a superb chip over the top of the visitor’s back three and Parrott was there to nod the ball past a hapless Craig Gordon in front of the stunned Scottish support in the northern end of the ground.

The opening half didn’t pass without some hairy moments for the hosts though. Duffy gave the ball away twice at the back but John McGinn was unable to convert on both occasions, shaving the post before dribbling one into Kelleher’s arms.

Ireland might have been further in front had it not been for Gordon who stopped Browne’s cross-cut shot from finding the bottom corner while he also had to be alert to deny Duffy at the back post.

Nottingham Forest’s Scott McKenna showed his Premier League qualities with an expert intervention to flick McClean’s curling cross away from the head of Obafemi who looked destined to score otherwise.

Scotland struggled to play through the heart of the Irish midfield and introduced Billy Gilmour after the interval in a bid to rekindle the joy Ukraine had in that area in midweek. That plan went out the window five minutes later as Obafemi deservedly got on the scoresheet and how!

Jayson Molumby led the high press and the ball broke to Obafemi who rifled the ball into the top corner from 25 yards to put Kenny’s charges 3-0 up.

Unfortunately for the Swansea City striker, he had to be replaced five minutes later by Scott Hogan who thought he had a fourth goal after Grant Hanley desperately hacked the ball off the line following his header. VAR confirmed the Norwich City defender did enough.

Both sides rang the changes after the hour mark in a nod that the result was secure for Kenny’s men as the game assumed the friendly feel that the Nations League was designed to dissolve.

As the beleaguered Tartan Army began to filter towards the exits most of the 46,000-strong crowd remained in their seats to sing the Irish team home.

Munster Senior League round up: Trebles for Rockmount and Corinthians https://t.co/whWJw4j4bi pic.twitter.com/3iahhaeuY9