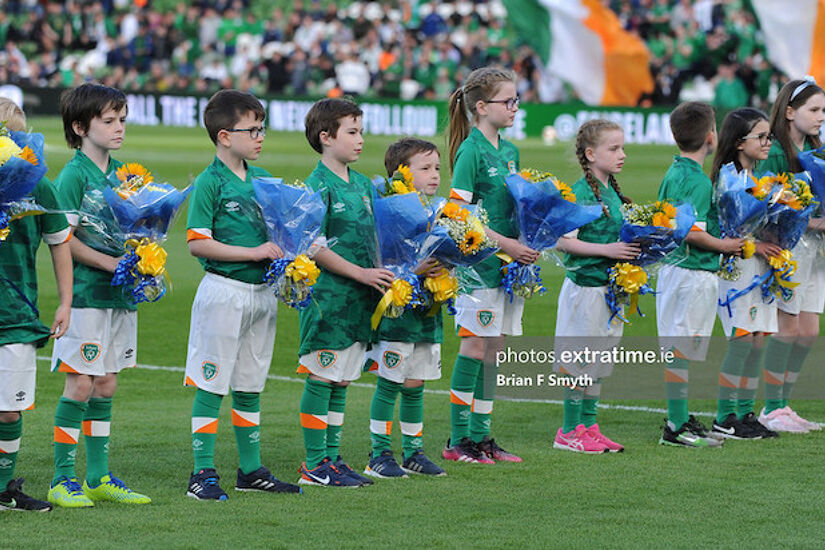 The Boys in Green face Scotland in their third game of the UEFA Nations League at the Aviva Stadium with kick off at 5pm on Saturday.

Stephen Kenny’s charges are still looking for their first points of this year’s campaign and their first ever win in the competition after no wins in a dozen Nations League games under both Martin O’Neill and Stephen Kenny.

The Boys in Green come into this game off the back of two surprising defeats away to Armenia and at home to a second string Ukranian side which leaves them bottom of the group with no points from their opening two games.

Optimism has turned to of chaos in the last seven days after back-to-back defeats with no goals to show for it arrested a run of one defeat in 12 heading into this summer international window.

Ireland have struggled to create clear cut chances while looking vulnerable on the break but manager Kenny insists he won’t change his style of play but has acknowledged his side need to improve in front of goal.

“There’s a difference between tactics and style of play,” said Kenny when speaking with the media in Abbotstown on the eve of the game. “The style won’t change, we are committed to that regardless. Tactically we always have to adapt.

“We had a good run from March to March where we scored 23 goals which is a really high amount for an international team and we have come up short in front of goal in the last two games. That doesn’t mean everything is wrong, we haven’t capitalised on the opportunities we have been given. We have to improve in that regard.”

Nathan Collins is looking forward to the game against our Celtic neighbours. "There is a bit of rivalry there which gives it a bit more of a sense of occasion,” said Collins. “We'll be looking to put the past two matches behind us and take the positives from both of them.

On the injury front, Seamus Coleman and John Egan have both been ruled out of the remaining two fixtures against Scotland and Ukraine (in Poland). Coleman has a groin injury while Egan has failed to shake off an ankle injury picked up in the loss against Ukraine and both have left the camp.

There will be late fitness tests for two players whom Kenny didn’t reveal but Michael Obafemi didn’t take full part in training on Friday afternoon in Abbotstown.

Scotland put behind more Hampden heartbreak behind them after they bounced back from their World Cup playoff semi-final defeat to Ukraine with a 2-0 win over Armenia during the week.

Steve Clarke’s side were unbeaten in eight games until they lost to Ukraine and arrive in Dublin with the opportunity to maintain their place at the top of the Nations League as they look to secure a playoff place for the 2024 European Championships.

The Nations League has been kind to the Scots while not so to Ireland but the former West Bromwich Albion boss expects a response from Ireland.

"I expect a tough challenge," said the Scotland boss, who confirmed Rangers goalkeeper Robby McCrorie has been drafted into the squad. Keeper Zander Clark and defender Liam Cooper dropped out for their respective weddings.

"Anyone going to Dublin to play can expect a tough game,” said Clarke.

"Obviously their last two games have gone against them but only by one goal.

Scotland will be backed by a 2,500 strong Tartan Army for the first meeting between the sides since a 1-1 draw in Dublin in 2015.

In ten matches since the side first met 1961, both countries have won on four occasions with three draws between the two teams.

Scotland have lost just one of their last ten games in all competitions (winning seven), losing 3-1 at home to Ukraine earlier in June.

The visitors are undefeated in their last four visits to Dublin, although three of those meetings ended level. Scotland’s last away defeat to Ireland came back in June 1963, losing 1-0 after Noel Cantwell got the winning goal.

Stephen Kenny: 'I am disappointed we have not got points on the board, I have professional pride and I feel disappointed with that' https://t.co/4iZJuDv0gh pic.twitter.com/HEnK5wrz45