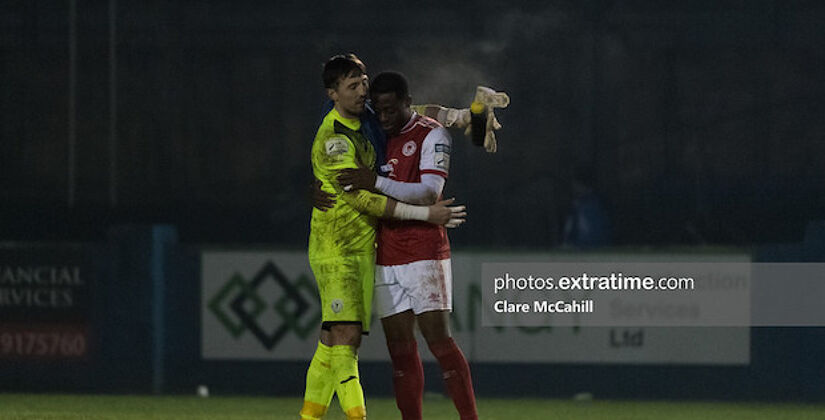 Pats are looking to make it three wins in a row to keep pace with Shamrock Rovers at the top of the Premier Division as they host bottom of the table UCD at Richmond Park on Monday evening (19:45 kick-off).

A win away to Finn Harps and a massive home victory against Rovers has put the Saints firmly in the early season title picture, only trailing their city rivals Rovers on goals scored.

The FAI Cup holders will feel confident of solidifying their position at the top of the table against winless UCD, but manager Tim Clancy is firmly focused on the game against the Students.

"We are expecting another tough game. We are back at home and we are hoping to have another big crowd at Richmond and have the place rocking again. We had a brilliant traveling support in Donegal on Friday,” he said.

“We've got a strong squad available and it was great to see Ronan Coughlan make his return from injury the other night.”

Pats have a difficult fixture list with a long trip to Donegal last week being closely followed by another trip up north to Derry on Friday but Clancy is confident that his side can push through the fatigue.

“It's going to be a big week for us, after the long trip to Harps, we host UCD and then travel to Derry on Friday so it will be a big ask but we are ready.

“We can take confidence from our last couple of performances, we've got to make sure we are at it as every game in this league is difficult."

The Students are awaiting their first win since returning to the Premier Division and face another difficult away trip to Richmond Park after falling to a 3-0 defeat in Tallaght on opening night.

The Students’ game on Friday against Derry City was postponed due to a waterlogged pitch so UCD will be hoping that a weeks rest will prove a useful advantage against a Pats side that made a long journey to Finn Harps.

Andy Myler’s men have put in two solid defensive performances, shutting out Shelbourne and Harps at the UCD Bowl, but goals have been hard to come by for the Students who only hit the back of the net for the first time this season in their 4-2 away defeat to Drogheda United, their fourth game of the year.

UCD have shown that they can perform under pressure, especially during their impressive playoff campaign, but will need to get wins on the board soon to avoid being cut adrift at the bottom of the table.

The last meeting of the sides came in a scoreless draw at Richmond Park in September 2019.

The Students’ last win in the fixture came in a 3-1 FAI Cup victory in August 2019 while the Saints got the better of UCD after a 1-0 win in the league two months earlier.

UCD won promotion to the Premier Division at Richmond by beating Waterford 2-1 in the promotion/relegation final in November.