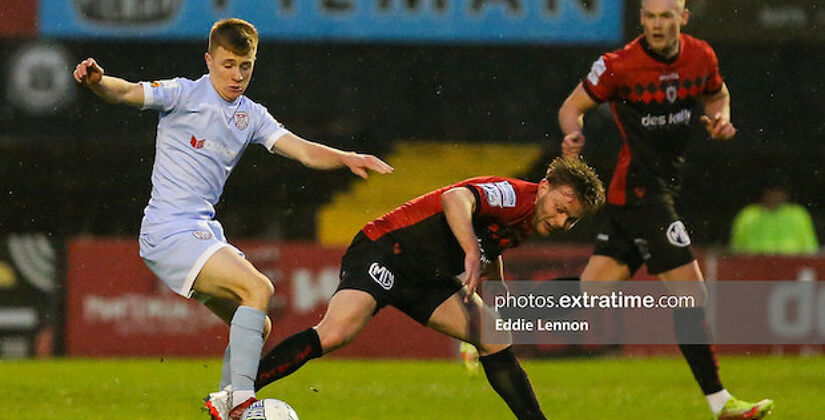 If Andy Myler’s men can get their first victory of the season, having drawn three and lost four, it would move them within a point of Bohemians and depending on results elsewhere – Finn Harps play Drogheda United with an 8pm kick off – it could move them off the bottom of the table.

They go into the game a point behind Harps who currently reside in the relegation play-off position just above UCD.

The Students can take plenty of positives from their home form this season as they are unbeaten at the UCD Bowl – having earned scoreless draws against Harps and Shelbourne, along with a 1-1 draw against Bohemians.

They come into the game on the back of a 2-0 defeat in Dundalk last Friday night and it is a tough task they face against the league leaders Derry City who have won two and drawn one from their first three matches on the road this season.

With a victory in Belfield, the Candystripes can move six points clear at the top of the table, with one game to go before the season hits the quarter-way mark.

Ruaidhri Higgins’ men got themselves a third injury time winner of the season on Friday on their most recent visit to Dublin.

James Akintunde broke the Bohemians’ hearts with the late winner in a come-from-behind victory. Ronan Boyce found City’s equaliser a minute off the hour mark with Akintunde earning all three points with his 93rdminute goal.

"It was a brilliant win and it shows again the fitness levels of the players and their desire to keep going right to the end," said City boss Ruaidhri Higgins.

"There was little time for celebration and it was a case of getting home for some rest and recovery before heading to Belfield on Monday.

"I honestly believe that UCD should have more points than what they have at the minute considering how they've been playing.

"They're very capable of creating chances and in Colm Whelan, Liam Kerrigan and Dylan Duffy have three of the best young attacking players in the country.

"We have to go there and counteract that threat and look to play on the front foot ourselves, and that's what we'll try to do."

There are a few knocks in the City camp with Will Patching having come off at half time having got a knock to his eye while Akintunde picked up a minor injury. However, they are both expected to be available for the trip to Dublin 4.

This is a re-arranged match after the initial fixture on 11 March fell foul of the weather.

Jamie McGonigle has four league goals so far this season - level with Dundalk's Steven Bradley and Shamrock Rovers' Graham Burke. They are all a goal behind top scorer Aidan Keena who has scored five for Sligo Rovers.

The teams last met in the Premier Division in 2019 when City won in Belfield 3-1. The other game in UCD was a 2-0 win for Derry. In the Brandywell, the Candystripes won 3-0 and the other game in Derry ended in a scoreless draw.