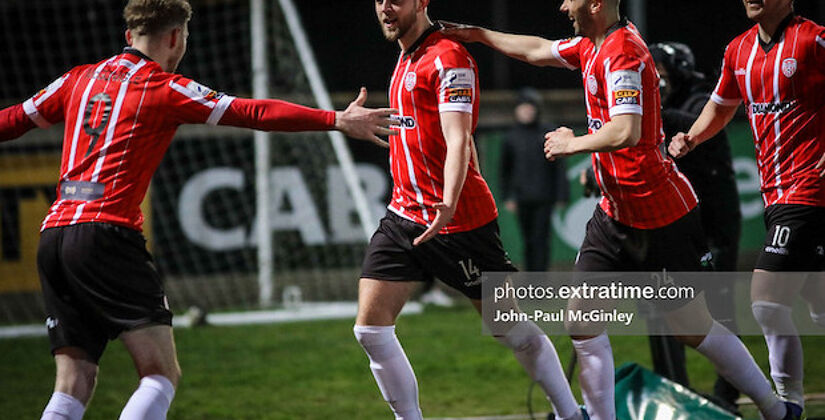 Derry City moved six points clear at the top of the table with a well earned 2-0 victory over UCD in Belfield on Monday night with thanks to second half goals from Will Patching and Ronan Boyce.

It was top versus bottom but you wouldn’t have known it in the opening exchanges of this re-arranged fixture which had been hit by the weather last month. The Students, who were unbeaten at home coming into the tie, started brightly and put the visitors under a good bit of pressure in the opening few minutes as Derry were slow to get going.

When they did up their game though, City certainly were unlucky not to score and give themselves at least a one goal advantage at the break.

Twice the Candystripes cracked shots off the woodwork from distance in the opening half but failed to find the back of the net in the first half.

Adam Verdon had the opportunity to put three set pieces into the Derry City box inside the first six minutes but the Candystripes defence stood firm.

With the creativity of Patrick McEleney, Will Patching, Matty Smith and, in particular, Brandon Kavanagh across the midfield, it wasn’t long before City took the game to UCD.

Smith was the first to test Lorcan Healy in the home goal and then on 18 minutes Cameron Dummigan let fly from all of 35 yards with the ball looking destined for the top corner.

However, Healy stretched to his fullest to tip it onto the post and away to safety. Moments later Kavanagh slipped Jamie McGonigle through on goal but with only the UCD ‘keeper to beat he dragged the ball wide of the goal.

On 26 minutes, Healy was beaten by a looping effort by Kavanagh but the ball clattered off the underside of the crossbar and away to safety from a UCD perspective.

McGonigle was looking to play off the shoulder of UCD’s central defenders and when he dragged Eric Yoro wide on the half hour mark and then cut in, Yoro was thankful of the positioning of teammate Michael Gallagher who blocked the Derry striker’s well struck effort.

Late in the half City ‘keeper Brian Maher nearly got caught out of his goal with Colm Whelan swivelling on half way to get a shot away but he couldn’t get it near the goal and that saved Maher’s blushes.

In first half injury time, Whelan whipped a low cross from the left in front of Maher’s goal but it was just a touch ahead of Liam Kerrigan who couldn’t convert the cross.

Patrick McEleney was given far too much space five minutes into the second half and Healy had to be bright diving low to his left to push the ball around the post for a City corner.

Patching was up next to try his luck from outside the box and his effort only just cleared the crossbar with the ball embedding in the trees behind the UCD goal.

McJannet’s effort clipped UCD captain Jack Keaney on the way behind on the hour mark for yet another corner as the visitors pegged Andy Myler’s men back who were finding it very difficult to hold onto the ball and take the game to the Candystripes.

When Patching put in a corner, earned off a Matty Smith deflected effort on 65 minutes, City skipper Eoin Toal headed home but the goal was ruled out for an infringement.

The Students were really living on the edge at this point and Myler brought on Evan Caffrey as he looked to get his side going in the second period.

Patching’s free kick on 66 minutes finally broke the deadlock as he got the ball around the UCD defensive wall and by the despairing dive of Healy – it was no more than the Candystripes deserved.

The goal woke the home side up and Kerrigan drove through the centre with his low driven shot going just the wrong side of the post. However,  the equaliser avoided them and City doubled their lead on 77 minutes as Ronan Boyce stole in at the back post to side foot home Cameron McJannett low cross.

It means that whatever way the result goes in next Friday’s north west derby away to Finn Harps, City will sit top of the table at the conclusion of the first series of games. With that lead over second placed Shamrock Rovers at the quarter mark of the season and the Candystripes eye catching performances, City are very much in this title race.