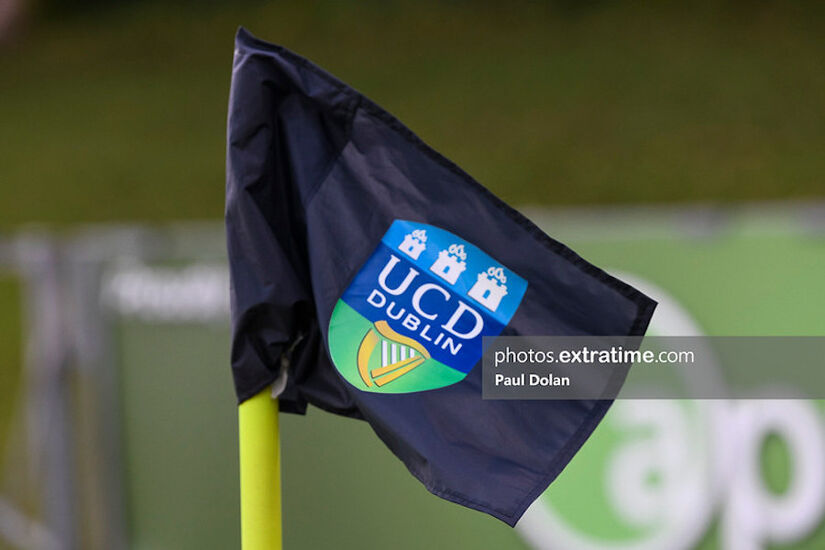 UCD moved into pole position in the race to finish ninth in the Premier Division, and avoid automatic relegation, after they picked all three points against Drogheda United at Belfield on Friday night.

Their 2-1 win, allied to the 2-2 draw between Bohemians and Finn Harps at Dalymount Park, means they now move two points ahead of their Donegal rivals, with the bonus also of having an extra game in hand.

That match is on Monday against Shelbourne and becomes the focus for Andy Myler’s side before they then head to Donegal next Friday for their penultimate game of the season and the showdown with Harps at Finn Park.

The Students were slow to start, perhaps affected by the terrible conditions, wind and rain, which greeted both teams at the start of the game.

Drogheda seemed to make light of the conditions however and they raced into an early lead courtesy of a third minute goal from Shamrock Rovers loanee Darragh Nugent.

Nugent skipped inside UCD left back Evan Osam and fired an unstoppable shot past Kian Moore from all of 25 meters.

It took a while for UCD, whose manager Andy Myler was sitting in the stand for the first of a four-game ban, to get going but they began to find their rhythm midday through the first half.

Their centre backs Jack Keaney and Sam Todd completely snuffed out any challenge posed by Chris Lyons and Dean Williams, leaving left winger Daryl Rooney as the only remaining threat up front for the visitors.

Rooney had a great duel with right back Michael Gallagher and he beat the UCD defender on several occasions only to see his crosses easily dealt with by Keaney and Todd.

UCD got a deserved equaliser in the 39th minute when Keaney stuck out a leg and diverted a free kick past Colin McCabe to leave the sides level at the break.

The weather conditions had improved considerably for the start of the second half and UCD now seemed the hungrier of the two sides, not surprisingly given they had a much greater motivation to pick up all three points.

Sean Brennan was real ball of energy in midfield for the Students and he was one of the key players driving them on in search of the lead goal.

That vital second goal did come in the 67th minute, an almost direct replica of Nugent’s goal in the first half. The ball was worked wide on the right to Dara Keane and he strode in from the touchline and fired a superb shot into the top left corner of the net leaving Colin McCabe stranded on the goal line.

Kevin Doherty’s side did try to regain parity, mainly through the hard work of creative midfielder Darragh Markey, but they were making no headway up front and did not threaten Moore any more for the rest of the game.

They could probably have done with an injection of energy in the final quarter of the game but as Doherty’s bench was made up of almost all youth players, he chose not to make any substitutions over the course of the 90 minutes.

UCD are now on 22 points to 20 for Harps and will look to extend that advantage when they face the FAI Cup finalists Shelbourne at Tolka Park on Monday night.