Thomas played for Derry City's U20 side in 2010, making occasional appearances for the first team and in 2011 he was elevated to the first team squad, making the bench nine times during Derry's Premier Division campaign.

In February 2012 Thomas signed for Finn Harps and made his league debut away to Limerick FC on 2 March 2012. He was ever-present that year, playing in all 28 of Harps' First Division games and scoring twice. In 2103 Thomas added another 20 league appearances to his career tally as Harps finished sixth in First Division.

He left Harps at the end of 2013 and spent pre-season of 2014 with Derry City where manager Roddy Collins set up a move to Californian side Temecula FC. Thomas arrived in the US in March 2014 but after a three month stint there he returned to Finn Park, signing for Ollie Horgan in July 2014. His second spell with Harps began with a substitute appearance against Cobh Ramblers in July 2014 and he went on to make 9 league appearances by the season's end.

Thomas made 23 league appearances in the 2015 First Division season, scoring once in a 1-0 win over Wexford Youths, as Finn Harps were promoted via the play-offs although Thomas didn't make an appearance in any of those four games. And in 2016 he added 9 more league appearances to his career tally as Harps retained their Premier Division place with a 10th place finish. 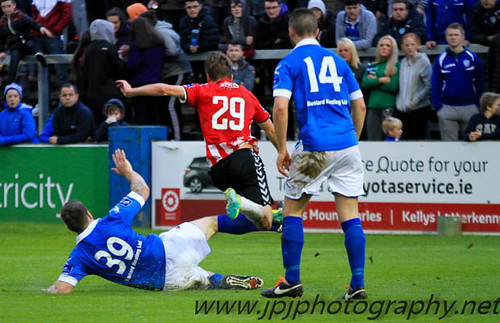