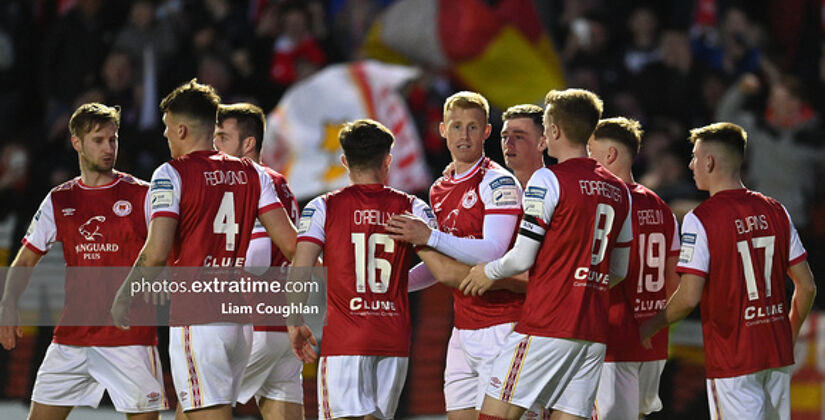 St Patrick’s Athletic took all three points on offer in their encounter with Finn Harps at Richmond Park on Friday night courtesy of a goal in either half from Eoin Doyle.

The Donegal side had taken a share of the spoils on their previous trip to the capital, Mark Timlin netting a late equaliser against Bohemians on Good Friday, after his side had been reduced to nine men. Tim Clancy’s men, for their part too, had recorded draws in each of their previous two home games.

After serving their suspensions against Sligo Rovers on Monday, Ryan Rainey, Elie N’Zeyi and Eric McWoods returned to the Finn Harps starting lineup with defender Jose Carillo the fourth change to the eleven who kicked off proceedings on Monday night. Their hosts replaced two of their back four with Breslin, Abankwah replacing Scott and Bermingham while further up the field King, McCormack, Adam O’Reilly and Eoin Doyle were named as starters, having all been on the bench on Monday against UCD.

The returning McCormack was denied by McGinley in the opening ten minutes before another couple of chances for Pat’s saw Ethan Boyle come to the rescue for Harps and preserve their clean sheet. Another chance fell to the Athletic just past the half hour mark as McGinley once more thwarted the hosts- Eoin Doyle denied this time.

However, the former Bolton Wanderers frontman had his own way with five minutes left in the half, nodding in a Billy King centre for his third league goal of the season and his second against Harps- he netted the second in a 2-0 win at Finn Park earlier in the season.

Half time saw Ollie Horgan, fresh from being part of the Irish Schoolboys Under 18 setup defeated in the Centenary Shield decider in Wales on Thursday night, replace Bastien Hery who picked up a knock in the first half. His replacement, ex Pat’s winger Mark Timlin, had a chance to equalise but Anang saved well.

His opposite number McGinley denied the Saints a second from a free kick before being beaten from another type of set piece coming up to the hour mark- Eoin Doyle converting a penalty after Joe Redmond was fouled from a corner kick.

A couple of chances to ripple the net fell to both sides in the remaining half hour, however on loan West Ham netminder Anang produced a great save to deny Yoyo Mahdy and earn his sixth clean sheet of the season. At the other end, Eoin Doyle narrowly missed out on the chance to become the second player to score a hat trick on Friday night, following the exploits of Jamie McGonigle at the Ryan McBride Brandywell Stadium.

The two in-form strikers face off at Richmond Park next weekend with third place St Pat’s looking to cut the six point gap to Shamrock Rovers in second while Finn Harps host Shelbourne as they look to close a five point gap between themselves and Damien Duff’s Reds in the battle to escape ninth place.