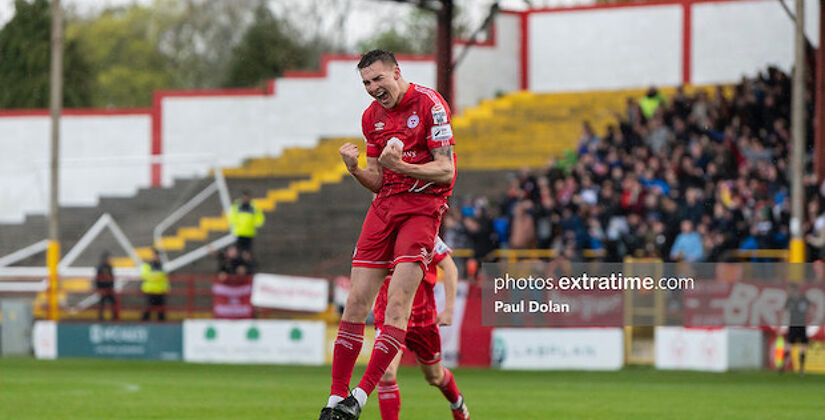 Shelbourne recorded their first back-to-back wins of the season when they defeated Drogheda United by a single goal margin at a sunny Tolka Park on Friday night.

The first 45 minutes of this game was played with a high level of intensity but nevertheless was very scrappy for the most part. Shels were forced into a change from the team announced before the game, with Aodh Dervin coming in for Mark Coyle who pulled up injured during the warm up.

The home side started the brighter of the two sides and played a lot of route-one balls through to Sean Boyd but he was very well marshalled by Keith Cowan at the heart of the Drogheda defence.

The Boynesiders in general looked a lot more robust with Cowan at the back and theirs was a much-improved performance considering they had conceded 11 goals in their last three matches.

The best chance of the opening period fell to Shelbourne but they were unable to finish the move with a goal, reinforcing the fact that goalscoring is their achilles heel this year. Shane Griffin fed Dervin who in turn played a superb ball down the left channel to Conor Kane. He drove past a number of Drogheda defenders but there was nobody able to make use of his pullback and the chance was lost.

Drogheda did improve as the half progressed and their best chance came as a result of a driving run by left back Dane Massey. He made it all the way into the box before his shot was diverted for a corner which was then cleared to safety by the the Reds defence.

Shelbourne’s positive start to the second half paid dividends when Shane Farrell floated a ball to the far post in the 51stminute where for once Boyd had escaped the attention of Cowan. He had time to head the ball across the goal and out of reach of keeper Sam Long. It was no more than they deserved as the home team had been the more inventive of the two sides in the final third of the pitch.

The Reds began to dominate the game after that goal and JR Wilson had a good chance to extend the lead a few minutes later when his powerful header from a corner flashed over the bar.

Drogheda manager Kevin Doherty went to a three-man backline at that stage and it did work to an extent as they were a much greater threat from there to the end of the match.

They created a few half chances, particularly those for substitutes Chris Lyons and Georgie Poynton but overall, they lacked some composure in front of goal and never really tested Brendan Clarke in the Shels goal.

Two wins on the trot is a great boost for Shelbourne who now climb out of the relegation zone to join other mid table sides Bohemians and Sligo Rovers with an 18 points total.

These are now worrying times for Drogheda United however as they have lost their last four matches and sit just three points above ninth placed Finn Harps, a side they face next Friday night in Ballybofey.