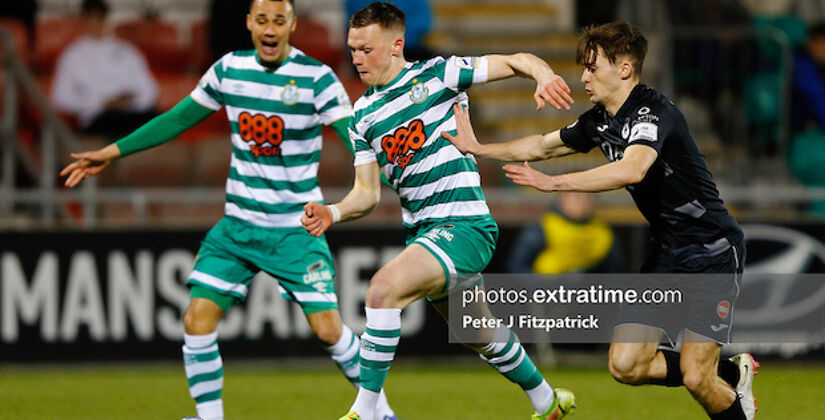 It was a helter skelter second half in Tallaght as Shamrock Rovers came from two goals down to take a point against Sligo Rovers.

The visitors had waited nine years to win in Tallaght Stadium before they did so last year and they were on their way to make it two wins in their last three visits to Dublin 24 with a 2-0 half time break thanks to goals from Will Fitzgerald and Aidan Keena.

However the Hoops put in a spirited second half performance to earn a point thanks to a penalty from Graham Burke and an own goal from Adam McDonnell.

Sligo Rovers were clinical with the chances that came their way in the opening period. They gave themselves a two goal cushion at the break scoring across a period of a dozen minutes.

The second goal came courtesy of a dreadful error by Barry Cotter who coughed up the ball to Keena. The striker, who is in a rich vein of form having scored a hattrick last week, didn’t need to be asked twice to make the most of the ‘pass’ from Cotter who was withdrawn at half time by Stephen Bradley for Neil Farrugia.

There really wasn’t anything that Alan Mannus could do with either goal on his return to the team having missed out on the Hoops’ scoreless draw in Dundalk last Monday night.

Hoops Head Coach Bradley also dropped Richie Towell and Jack Byrne to the bench. While it might be viewed that they missed the creativity of those duo, the Hoops had plenty of chances in the first half with Ed McGinty by far the busier goalkeeper.

With Byrne on the bench, it fell to Dylan Watts to take the Hoops set pieces including four first half corners. The home side through Cotter (twice) and Sean Hoare got their head on the ball from those set pieces but they couldn’t force the ball into the back of the net.

The opener came on 18 minutes when Fitzgerald headed home a delightful centre from Jordan Hamilton. Keena then grabbed his fifth of the season exploiting that poor pass by Cotter to put the ball by Mannus.

The Hoops on several occasion had shots that fizzed across the goal from Burke and then Gaffney. McGinty pulled off two good saves after that, first holding onto a low driven Gaffney shot and then taking in a Watts shot when the former Bohs man should have powered it home.

As well as Farrugia’s introduction at half time, Byrne came on in place of Gary O’Neill.

The visitor’s weathered the storm early in the second half as the Hoops pushed forward but the home side got back into game after a fine run by Andy Lyons was stopped by a lazy tackle from Adam McDonnell in the box.

Burke made no mistake with the spot kick on 63 minutes as he slotted it home with his left foot for his third of the season to half the deficit.

The Hoops continued to pile on the pressure with Byrne and Hoare’s delivery into the box causing all sorts of trouble. Hamilton almost put a header through his own goal off a Lee Grace header and Richie Towell went close with a shot from distance.

The pressure told in the end when McDonnell turned in Hoare’s header off a Byrne corner and into his own net at the South Stand end to send the Hoops supporters into heaven.

It kept Shamrock Rovers run of unbeaten league games going at 15 – with the last team to beat the Hoops in Tallaght being the Bit O’ Red last May. Sligo Rovers remain second and Shamrock Rovers fourth going into next week’s international break.