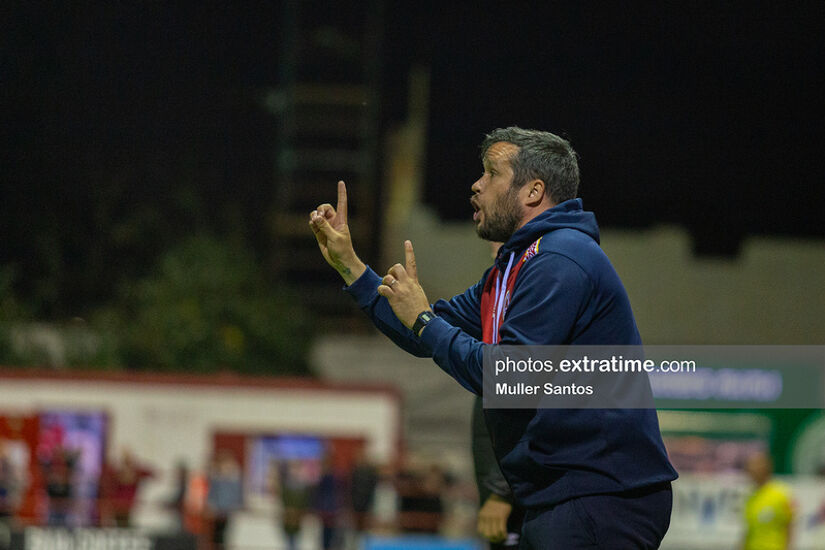 A last gasp winner from Adam O'Reilly earned visitors St Patrick's Athletic a 2-1 away victory over Dundalk to cut the gap to a single point in the race for third position in the table.

A crowd of 2,734 filed into Casey’s Field on a sharp autumn evening as Dundalk hosted St Patrick’s Athletic in a game where three points would greatly enhance a European place. Dundalk entered the game a place and four points ahead of their visitors prior to kick off.

Given the nature of Stephen O’Donnell’s departure from Inchicore at the end of last season and the importance of the fixture to both sides it was always going to be a charged atmosphere in the Carrick Road venue. So it proved to be, with a vocal home crowd witnessing  a period of early dominance from their side.

On 20 minutes, it was the away side who broke the deadlock- ex Pat’s player Sam Bone played a loose pass and it was seized upon by the high pressing Anto Breslin. A quick pass infield saw Chris Forrester receive the ball in space centrally and his effort scorched into the top corner beyond the despairing dive of Nathan Shepperd.

Indeed, despite having the majority of possession for the opening half hour, visiting keeper Danny Rogers only had a single save to make as he parried a tame Greg Sloggett effort.

It was the Meathman’s final action of the night, injury forcing his replacement by Robbie Benson and meaning that five ex Saints were in action for Dundalk. While the Westemeathman’s arrival was greeted with some ire from the away supporters, it was merely an appetiser for the home fans’ responses to a number of non-calls made by referee Damien MacGraith.

However, they were cheering for a different reason on the cusp of half time as Ryan O’Kane jinked inside the cover on the left wing and arrowed a low effort into the bottom corner of Danny Rogers’ net to tie the scores at the break.

The second half started on an even keel with neither side having much to write home about in the early stages- Andy Boyle’s brave block from Timmermans and a floated effort from Joe Adams on the edge of the penalty area were the heights of the goalmouth action in the opening quarter hour of the second period.

Despite both sides having periods of possession during the final half hour, there were no real chances of note as the final whistle approached. However, in the ninety second minute substitute Tunde Owolabi found a pocket of space to release fellow replacement Ben McCormack who pulled the ball back and Adam O’Reilly bundled a goal from close range to send the away fans into raptures and thoroughly deflate those supporting the Lilywhites.

With games running out for both sides it’s now a point separating the teams in the race for third place. Next week Dundalk travel to Finn Harps while Richmond Park will host the meeting of St Patrick’s Athletic and Bohemians.