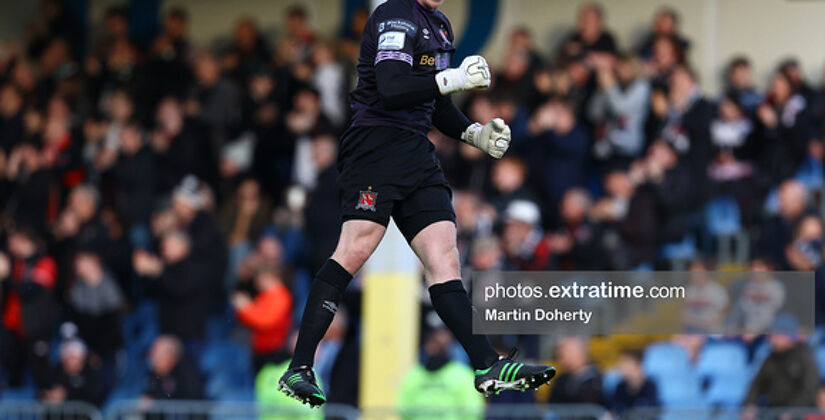 A stunning second half goalkeeping display from Nathan Shepperd to keep St Pat’s at bay ensured Dundalk collected all three points courtesy of a Dan Kelly strike at Oriel Park.

Fresh from their second away win in succession, Dundalk welcomed St Patrick’s Athletic to Oriel Park on a sunny Friday night.

The earlier match between the two this season was a goalless draw in Inchicore in April with both sides only having a single other blank scoresheet so far in 2022- Pat’s at the Ryan McBride Brandywell Stadium in March with Dundalk’s coming at Sligo in the same month.

From early on in the game, the signs didn’t look great for another goalless encounter as Nathan Shepperd had to push an Eoin Doyle header over the bar with less than two minutes on the clock. We saw another Doyle header and a tame effort from Joe Adams before Dan Kelly opened the scoring on 28 minutes.

The ex Bohs winger, who scored the winner against Finn Harps on Monday night, linked up with Pat Hoban and exploited some slack Pat’s defending on the edge of their box to skip past Anang and fire in the opener for his fifth goal of the season.

The Athletic, playing with a front two of the electric Tunde Owlolabi and the canny Eoin Doyle, failed to truly test Nathan Shepperd in the opening half- however, the same could not be said in the second period.

The young Welsh stopper was imperious throughout, making a number of outstanding stops to deny the visitors a precious equaliser. Approaching the hour mark, Tim Clancy rolled the dice and made a triple change- introducing Darragh Burns, Mark Doyle and Billy King to the fray. All three were denied by Shepperd on separate occasions.

First, he stood tall to block King after Burns had conjured some space in the box before then denying Eoin Doyle with an outstretched fingertip low to his left- the ex Sligo forward nodding a Burns cross goalwards before the Welshman’s stunning intervention. Shepperd’s next trick was to deny Burns himself as he deflected a thumping close range drive over the bar before scooping Breslin’s looped effort from the resultant corner off his line.

Five minutes injury time came and passed as the Lilywhites hung on for their third win in a week and finish for the break in second position with their next game at Oriel Park pencilled in for 17th June against Shamrock Rovers. For their part, Pat’s are due to host the same opposition the previous week as they look to kickstart the second half of the season with a win.