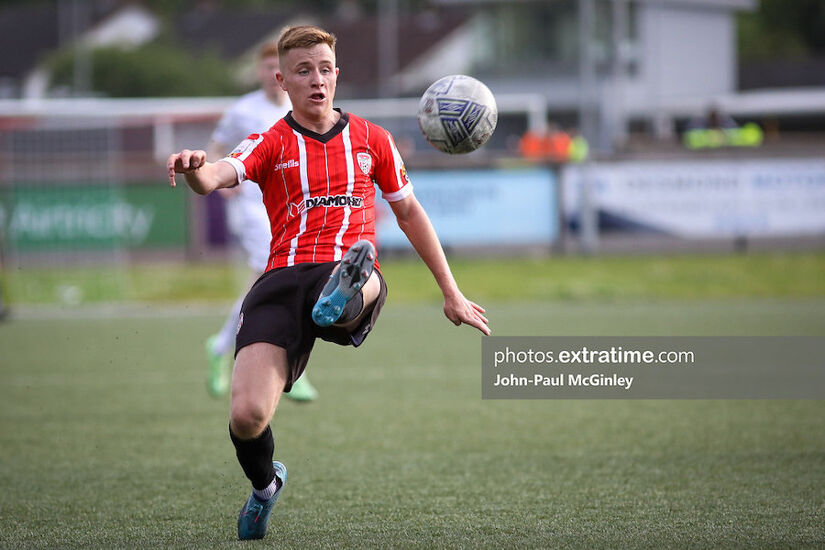 Derry City moved to within two points of the top of the table with a 3-0 win in the North West derby on Friday night.

Goals from Michael Duffy, Brandon Kavanagh and a late strike by substitute Jamie McGonigle (who also missed a penalty) means the Candystripes are mounting serious pressure on Shamrock Rovers for the title.

The Hoops play their game in hand over City this  Sunday against Shelbourne in Tallaght.

The opening goal of the game came in the 19th minute when Brandon Kavanagh slipped in Michael Duffy on goal. His low effort from the left beat McKeown to the delight of the home supporters.

James Akintunde had a couple of chances early in the second half that he wasted but it was Brandon Kavanagh who found the back of the net to double City’s lead in the 61st minute.

Will Patching’s low cross from the left just evaded Akintunde but Brandon Kavanagh running in behind was able to touch it home in the six yard box.

Akintunde was withdrawn for McGonigle and it was the sub who earned himself a penalty from a foul by Conor Tourish. However stepping up to take the kick McGonigle’s effort was saved by James McKeown diving to his left.

However, McGonigle did get on the scoresheet in injury time, turning and drilling an effort by McKeown from outside the box.

With UCD losing 2-0 at home to Sligo Rovers at least for Harps they remain off the bottom of the table but with just four games remaining they are only a point clear off the automatic relegation spot.