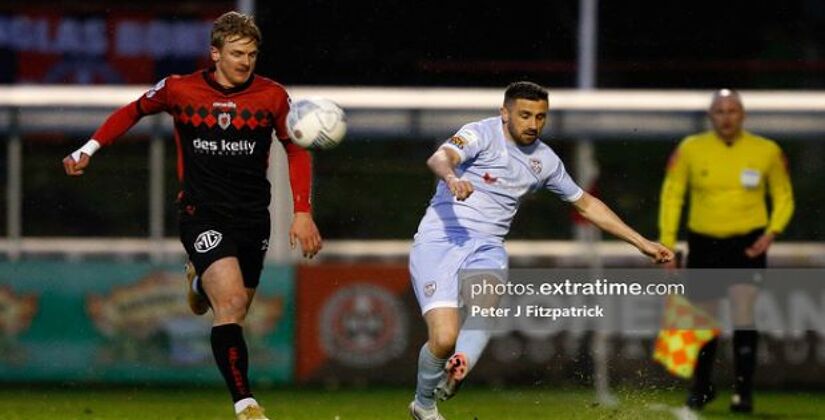 Derry City remain unbeaten in the SSE Airtricity League, as Akintunde’s last minute header won it for the visitors.

The home side came into the game sixth in the SSE Airtricity League, following a tricky start to 2022. Keith Longs side failed to win a league game last month and could only manage draws against the two newly promoted sides UCD and Shelbourne.

Derry on the other hand, arrived at Dalymount Park on Friday top of the league, and are one of two sides who remain unbeaten after six games played.

Derry had two players out injured in Michael Duffy and Ciaron Harkin, although Matty Smith and Michael Duffy both returned to the bench. Keith Long had three out, with Stephen Mallon, James Finnerty and Ryan Cassidy all injured.  As a result, youth player Nickson Okosun earned a promotion to the first team.

Bohs had the first chance of the evening. Ireland under-21 international Brian Maher was alert when he tipped Grant Horton’s powerful effort over the bar inside five minutes.

It was the visitors who should have gone ahead minutes later. Jamie McGonigle had a shot from 20 yards saved by Talbot, before he failed to tap in Brandon Kavanagh’s threatening cross immediately after.

Kavanagh was involved again on 20 minutes, as his volley on the edge of the box went inches wide of Talbot’s goal. Ali Coote tried his luck after an impressive run, but his tame effort trickled wide.

It was the hosts who took the lead on 25 minutes, with a goal of the season contender. Ali Coote exchanged one-two’s with Promise Omochere, Jordan Flores and Liam Burt and cut the Derry back line wide open. Coote played Burt through, who beat two men in the box before slotting past Maher to open the scoring.

Flores went close almost immediately after, as his 30-yard piledriver was parried by Maher.

Derry almost levelled matters just before half time. McGonigle’s driving shot looked destined for the bottom corner, but Talbot brilliantly tipped it around the post.

Kavanagh has the first chance of the second period, but his poor effort went well wide.

Derry equalised just before the hour mark after a period of sustained pressure on the Bohs back-line. Cameron McJannett’s beautiful cross found Ronan Boyce who smartly headed past Talbot to put Derry back in the game.

McEleney went close with a free kick immediately after, but Talbot did well to prevent his side hoing behind. Bohs had limited chances for much of the second half. Promise and Burt got themselves into good positions to shoot, but both effort were poor and lacked composure.

Talbot produced two magnificent saves from Boyce and McGonigle late on.  The Bohs goalkeeper tipped Boyce’s volley over the bar, before getting down low to prevent McGonigle getting the winner.

It was Akintunde who won it at the death. After going up a gear late on, Derry finally breached the Bohs back line on 93 minutes. A cross was knocked into the path of substitute Akintunde, who headed past Talbot to secure three points for the visitors. Derry remain unbeaten after seven games and go three points clear at the top of the league.

Derry remain in the capital and face UCD on Monday night at the Belfield Bowl, while Bohemians travel West to face Sligo Rovers on Tuesday.

Seán O'Connor has yet to write anything about themselves but click on the bio link to view all past work.