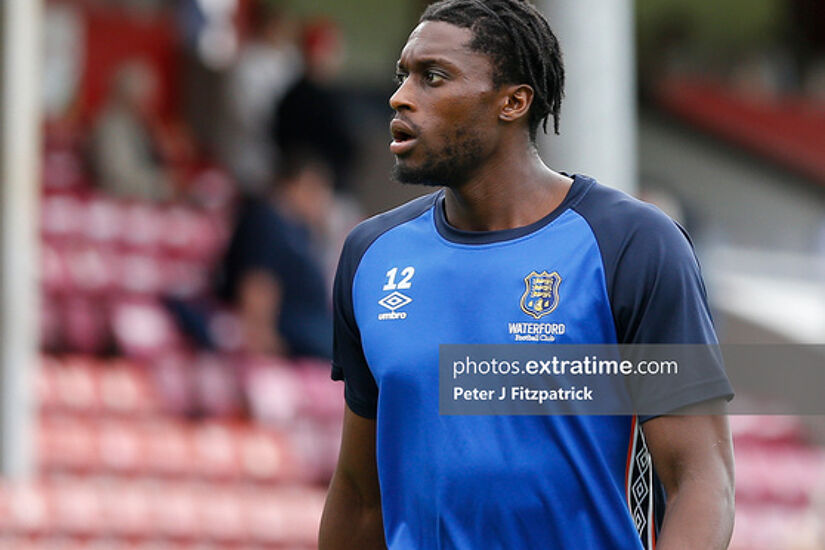 Tunmise Sobowale opened the scoring for Waterford as they beat Treaty United at the Markets Field Credit: Peter Fitzpatrick (ETPhotos)

Waterford FC survived a first half penalty miss and a nervy few final moments to take all three points at the Markets Field against Treaty United on Friday night and keep the pressure on Cork City and Galway United at the top of the First Division, courtesy of first half strikes from Tunmise Sobowale and Darragh Power.

Starting with both regular netminder Brian Murphy and Eddie Nolan, who turned 34 on Friday night, absent through injury the Blues lined out with Paul Martin between the sticks for his second start in a row.

For Treaty United, who hadn't conceded a goal in over six hours of football, there were four changes following their own cup victory - Brady, Christopher, Curran and Keane came in for Winn, Melody, Armshaw and Coustrain respectively.

A lively opening twenty minutes with chances for both sides was capped off with a superb strike from Tunmise Sobowale who opened the scoring from distance - Idowu's smart work down the left creating the opportunity.

Tommy Barrett's side had the chance to reduce the margin just before half time but Paul Martin, the penalty saving hero of Waterford 's FAI Cup campaign of 2021, enhanced his spot kick reputation by denying Enda Curran and preserving his clean sheet at the break.

The netminder denied Lee Devitt midway through the second half as Treaty sought a goal to bring themselves into the contest. They eventually made the breakthrough with recent signing Success Edogun netting in the dying embers of the game- the ex Athlone Town forward with a composed finish after a direct ball forward.

However, it wasn't enough in the end as Waterford took all three points and closed the game to Galway United in second place- the Tribesmen picking up a single point at home to Wexford.

For Treaty, it's a trip to Turner's Cross to face league leaders Cork City next weekend while Waterford host Galway United where a win would take them to within six points of second place with a game in hand.