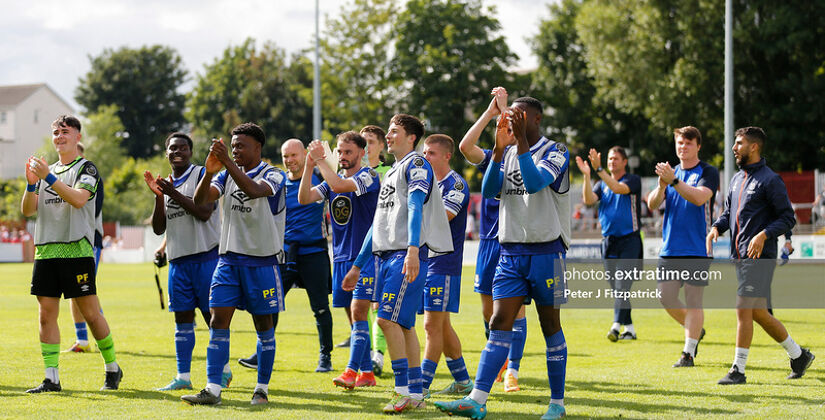 Tommy Barrett’s outfit will be seeking to strengthen their position in the play off places when they host Waterford FC at the Markets Field on Friday night (kick-off 7.45pm).

The hosts are on a three game unbeaten run in the league, having kept consecutive clean sheets in wins over Cobh Ramblers, Longford Town and Bray Wanderers in recent weeks.

They currently sit fifth in the table, three points behind Longford Town and the same distance ahead of Wexford, who face second place Galway United this evening.

Speaking to his club media ahead of tonight’s game, new signing Ben O’Riordan spoke about the atmosphere in the club at the moment, “There’s some really experienced lads here. That’s what I’m here for. I just want to win with them, I want to get to the Play Offs and hopefully get to the Premier Division then.”

The Blues went ahead through new signing Wassim Aouachria before being pegged back by a strike from Limerickman Ronan Coughlan and they went behind to a goal from defender Tom Grivosti a few minutes later. However, Aouachria scored his second soon after and Junior Quitirna notched the Blues’ third of the half as they retook the advantage ahead of a goalless second half which saw the Munstermen advance to the next round and the holders removed from the competition at the first hurdle.

But attention turns to the First Division once again, and Waterford still have a lot of work to do if they want to be in contention for automatic promotion come the end of the season- they currently sit in third place- eleven points behind second place Galway United with a game in hand.

Despite overturning Premier Division opposition last weekend, in the league Waterford have picked up two wins in their last five games and will need to improve that return in the closing stages of the campaign if they are to catch the Tribesmen or the Rebels at the top of the table.

“It was a really tough test [against St Pat’s] but I’m delighted for the lads. The work the players put in on the training ground paid off and I’m so proud of them.

“We park that result and look to Friday straight away. We’ve recovered well and got back on the training ground and we go there looking to win.

“Last week set the benchmark for the players and we know how well we can play, so we’ve got to perform and build momentum coming into the latter part of the season. We saw some brilliant performances last weekend and we’ll be looking for more of the same this Friday."

The sides met at the Markets Field already this season with the home side winning by two goals to one, courtesy of strikes from Matt Keane and Enda Curran, Eddie Nolan netting a late consolation for the visitors.

Waterford won the last league encounter between the teams with goals from Louis Britton, Roland Idowu, Shane Griffin and Cian Kavanagh earning the Blues a four nil victory ahead of the mid season break.