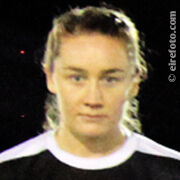 Rachel Graham was part of the Raheny United Ladies squad for the inaugural Women's National League in 2011. Rachel stayed at Raheny for the next three seasons, winning two league titles and three FAI Cups with the Pandas. She competed in Europe for the 2013/14 and 2014/15 Champions League, reaching the Last 32 in the latter.

Ahead of the 2015/16 season, Raheny United merged with Shelbourne adn formed Shelbourne Ladies FC, with Rachel signing on for the newly-formed club.