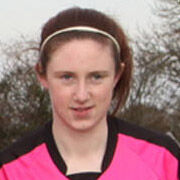 Jessica Gleeson was part of the Wexford Youths Womens squad for the inaugural Women's National League in 2011. Jessica played for Wexford in the Champions League and the WNL during the 2015/16 season.

Jessica has previously been called up to the Republic of Ireland squad, and ahead of the matches against Montenegro and Spain in April 2016, has 3 caps to her name.