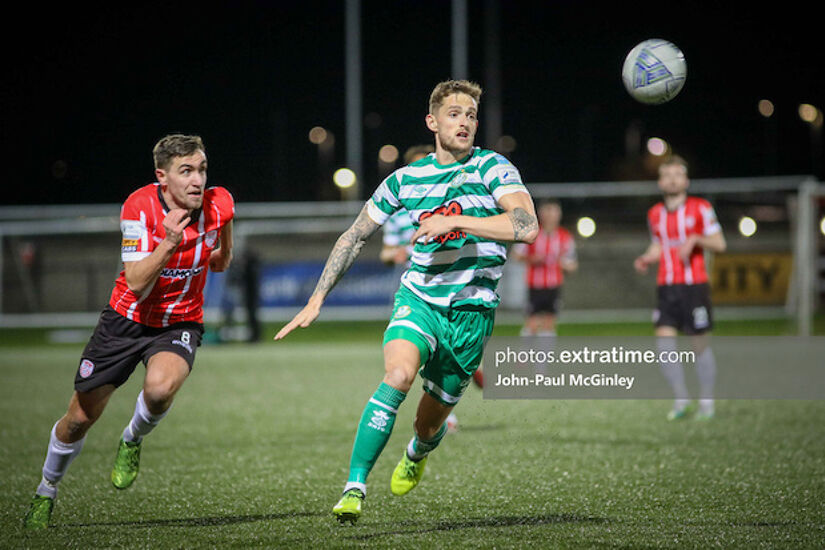 There is an oft repeated phrase in Spanish football that might be relevant to our humble league these days, “Hay Liga”. Literally ‘there is a league’ but the true translation would be uttered with an increased heartbeat and unconcealed joy, ‘we have a title race’.

Some might say, the clubs first among them, that it is too soon to call but with an eight point gap between second place Derry City and St Patrick’s Athletic in third and Shamrock Rovers only defeat of the season coming at the hand of the Candystripes we at least have a two horse race.

Shamrock Rovers have dominated the league in the last two seasons but had fallen slightly off the pace following Derry City’s decent start. However, the Hoops took back the lead of the Premier Division on Monday night following their 3-1 home win against Sligo Rovers while Derry disappointed with a scoreless draw against St Pats despite having the chances to win.

Head Coach Stephen Bradley says his side needs to tune in defensively for Friday’s game as they have given away sloppy goals in otherwise comfortable 3-1 victories over Finn Harps and Sligo Rovers.

Bradley said that Lee Grace has yet to be confirmed fit to play in what would be a blow as the Carrick-on-Suir man has been an ever present at the back for the Hoops this season until last Monday’s match against Sligo.

The game promises a spectacle and is almost a sell-out at the time of writing. The Hoops Head Coach said: “First vs second, in front of what should be a great crowd and two good teams on the pitch. These are the games that everyone wants to play and be a part of, it has all the makings of a great game.”

Rory Gaffney is in fine form for the Hoops with a stunning pressing display last time out against Sligo Rovers as he dovetailed with Graham Burke who completed a fine hat trick off the bench - both were part of four substitutes Bradley made with the game against Sligo scoreless at half-time.

City put down an early marker in the title race with their 2-1 home win over the Hoops early in the season.

Looking ahead to the mouthwatering clash on Friday, Candystripes boss Ruairdhi Higgins said: “They have at least four players in the squad who have played at senior international level and there is quality everywhere. It’s why they are back-to-back champions of this league.

"That said, we haven’t been doing too badly ourselves. We’re not going there to sit in, we’re going to try to win the game.”

For the Candystripes the danger man is clearly the recently crowned SSE Airtricity Player of the Month Jamie McGonigle, the first time a Derry City player has won that award in nine years. McGonigle’s well taken goal was the difference between the two sides when they last met in February as he pounced on a rare Pico Lopes error to win the game in the Brandywell.

City will likely be without the service of Patrick McEleney who came off early with an injury on Monday night and also Cameron McJannet who missed the game altogether.

In a sign of their ambition in building a long term challenge for the league Derry City have just announced that Dummigan has extended his contract to 2024 along with the majority of the Derry squad.

One can only hope that this ambition will show itself on Friday night on national television and that no one will be in any doubt that we have a title race this season.

Shamrock Rovers with their faithful home support have conceded only five goals in eight games at Tallaght Stadium, scoring 17 in the process.

Derry City on the other hand have a better record away from the Ryan McBride Brandywell stadium scoring 14 and conceding five in seven games.

The three top scorers in the league will all be playing with Jamie McGonigle (nine), Will Patching and Graham Burke (both with 7 goals).