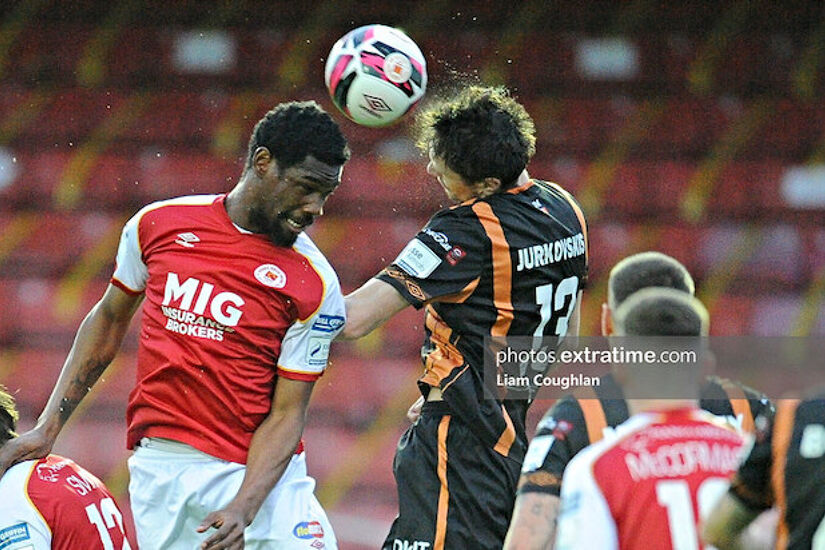 Friday night will see a full house return to Richmond Park with a 5,000 capacity crowd expected to pack into the venue beside the Camac for what will be the biggest crowd in Inchicore for over two years.

At stake is a berth in the 2021 FAI Cup Final. The home side haven’t been in Irish football’s blue riband game since 2014 when they last lifted the cup after a 53 year wait while Dundalk are vying to make it to a record seven consecutive FAI Cup finals.

The Saints are set for their first FAI Cup semi-final since 2016 having dismissed First Division opposition in the previous rounds – a 6-0 victory over Bray Wanderers, a penalty shootout success away to Cork City and a 3-0 victory over Wexford in the quarter-final.

Saints Head Coach Stephen O’Donnell speaking to his club’s media team noted that their early elimination from the competition last year provided them extra impetus for this season’s FAI Cup.

“We were really focused on this year's competition after getting beaten in the first round against Finn Harps last season,” said O’Donnell who won the cup three times during his playing career.

“We wanted to have a good cup run and we have had one. We are in the semi-final now and everyone is really excited. It was 2016 since St Pat's were in a cup semi final, five years is quite a long time, so we are really looking forward to the occasion."

"It's going to be a very tough game. Dundalk have been in good form and we know when they have their strongest 11, they are as good as anyone.

"They have some dangerous players, so we are under no illusions in regard to the test it's going to be. They've proven in the past month or so that they are capable of beating anyone.”

The Athletic have impressive form at home and are hoping for that to continue on Friday when they face the reigning FAI Cup holders.

“The fans are so tight to the pitch, and it adds to a great atmosphere and the fans have been brilliant since they have come back in. It helps when you have won eight games out of nine at Richmond since the gates have opened again, so they have had a lot to cheer about.

“The players love playing in front of them. Our fans have been brilliant with us when we have gone through sticky spells. They have never once got on the players' backs and have stayed totally behind them and that really helps players.

“There is great connection between players, staff and fans and long may that continue. There's a real feel-good buzz around the place at the minute.

“Everyone in looking forward to the game, excited to see a packed house at Richmond, it's been a long time coming. An FAI Cup semi-final in front of thousands, so it has all the makings of being a brilliant night."

The Lilywhites could make history on Friday by becoming the first side to make it to seven consecutive FAI Cup finals.

En-route to winning the cup last year, they beat Shamrock Rovers 4-2 in the final and equalled the Dublin club’s record of six cup finals in a row (from the 1960s).

Dundalk may well have to go on to retain the cup if they are to play in Europe next season and so there is a lot at stake when they travel to Dublin 8 on Friday evening.

They earned their place in the semi-final knocking out Treaty United, St Mochtas and Finn Harps following a replay.

In league action this season, it is honours even between the teams. In Oriel Park the first game ended in a 1-1 last April while the Saints scored a comprehensive 4-1 win in August in Louth.

In between Dundalk beat Pat’s 2-0 in Richmond Park with David McMillan scoring both goals.

The striker was a second half sub for the Lilywhites last Friday when Georgie Kelly’s last minute penalty for Bohs saw the game end 1-1.

“It was good to get back on the pitch, “ said McMillan about his return to action after injury when speaking to dundalkfc.com.

“A little bit earlier than expected but it had been a long eight or nine weeks getting fit and it was nice to be back playing football.

“We are in good form at the moment. Things are on the up, we are trying to build towards the FAI Cup semi-final and our aim now is to get back to the Aviva Stadium.

“We are seven unbeaten and on a good run so we want to keep that going.

“We are looking forward to it and both sides will be desperate to win it. It doesn’t matter how you win semi-finals once you win them! We have plenty of experienced players who have done it in the past.

“So do they, in fairness but they are going well in the league, they have good players and it should be a good game.“

MATCH STATS
The Lilywhites will travel to Richmond in good form, having won four out of their last six games as Vinny Perth’s side unbeaten in seven. However, there have been no wins in the last eight matches away from home.

It is 15 years since the sides last met in the FAI Cup at Richmond Park - Pat’s ran out 2-0 winners back then.

Dundalk have lost their last three meetings in the FAI Cup against St. Patrick’s Athletic. Their most recent victory over the Saints was in the 1993 semi-final.